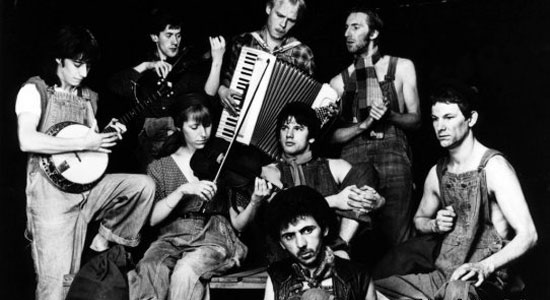 Most of my albums haven’t survived the digital era intact. I do like the idea of an album. And I’ll probably always think of it as the “real” musical unit, even though I listen primarily to singles now. But like most anyone, I don’t like every track on every album I own. And it’s easier to just dump most of those than spend a lifetime skipping them when they come on. The point of all this is that I realized over the weekend that there aren’t more than a dozen or so full albums left in my music library.

Of those, one of the most surprising is Too-Rye-Ay, the sophomore album from Dexys Midnight Runners. Again, like most anyone, my introduction to the band came by way of “Come On Eileen.” And, while I was hoping for a little more along those lines, I wasn’t prepared for the album. The songs are uniformly excellent. But, I think the thing that separates it from the other albums that didn’t fare as well in my collection is the clarity of singer Kevin Rowland’s vision. I’m not sure that I have another album that sounds so resolutely committed to an idea. The band has a distinct look and a unique sound, the album has a dramatic arc, and the lyrical themes are limited to just a handful. In all, Too–Rye–Ay is completely wild. And it’s completely focused. Each person’s criteria for this sort of thing is different. But those are the two elements that usually push a record over the top for me. And I can’t think of a better one to illustrate the point. To that end, I’ve pulled together a handful of uptempo tracks off Too–Rye–Ay and the band’s debut, Searching For The Young Soul Rebels, to which you can hit the street, the treadmill, the bench. And get lost.