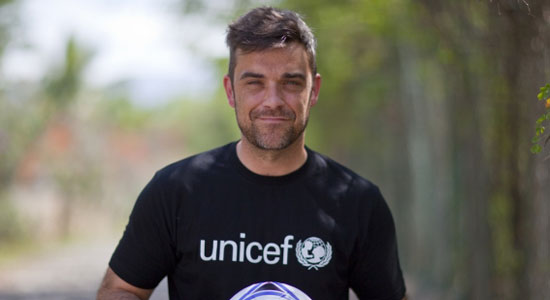 I love Robbie Williams. I could probably watch clips of him (or Diddy, for that matter) dancing for the better part of an afternoon. I don’t expect anyone to share this love per se. But if you’re only familiar with him from his abortive attempts at U.S. success and from Jessica Simpson’s ubiquitous verson of “Angels,” I’d like to take a moment to tell you about Rudebox. The album, Williams’ seventh, is one of those that pops up every couple years where a prominent artist will abruptly (and often disastrously) switch directions. (See also Chris Cornell’s Timbaland-produced Scream and Lil Wayne’s rock effort Rebirth.) Rather than keeping on with collections of adult-contemporary ballads and club tracks, Rudebox finds Williams dabbling in hip hop on the title track, covering two ’80s hits, singing Manu Chao with Lily Allen, collaborating with the Pet Shop Boys on a song about the Pet Shop Boys and closing out the album with a remarkably candid pair of tracks about how he wound up in Take That and his ensuing departure.

Like I said, albums like this pop up every once in awhile, where it’s unclear if musicians have simply lost their direction or found a new one. In this instance, it seems like both. Accordingly, Williams sounds alternately relaxed, resigned and on fire throughout the record. And given that it’s much clubbier than his previous efforts, it makes for an inspired and curious workout companion.