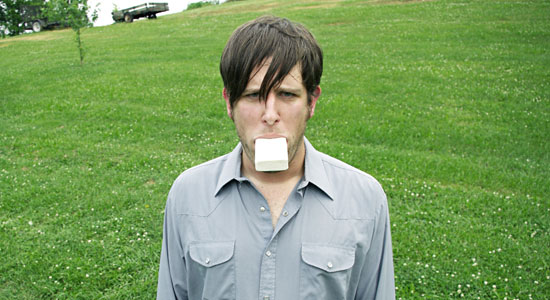 Even James Jackson Toth’s most rabid fans probably can’t keep track of the prolific singer/songwriter’s output. The Lexington, Ky.-based Toth has issued numerous solo and group efforts (including cassettes, CD-Rs, limited-edition vinyl, etc.) under his own name as well as such monikers as WAND, Wooden Wand And The Vanishing Voice, H.P. Witchcraft, the Jescos and the Blood Group. His latest release is Wooden Wand‘s Death Seat (Young God), an impressive 12-track album produced by YG label head and Swans frontman Michael Gira and featuring musical contributions from members of bands such as Lambchop, Silver Jews, Mercury Rev, Glossary and Fire On Fire. Toth is heading out on European and North American tours in the new year, but in the meantime, he will be guest editing magnetmagazine.com all week.

MAGNET: You have released music under a number of different names and with a lot of different project on a lot of different labels. Do you ever think your fans have a hard time keeping up with what you are doing?
Toth: Probably. It’s not really something I care about, though. People used to tell me they had a hard time finding all of the WW stuff—tapes, lathe cuts, comps, etc.—and I would usually just tell ‘em that they don’t necessarily need it all. I don’t own half of that stuff. Buy what you can get on Amazon or whatever. My goal is to create a body of work, not a checklist.

The new album is on Michael Gira’s Young God label, and he produced the record. What was it like working with him? How did he compare to other producers you have worked with, such as Lee Renaldo?
I’ve been lucky to have worked with some very brilliant, very creative producers (Steve Fisk, Lee Renaldo, etc.), but Gira was my favorite. Of everyone I’ve ever collaborated with, Gira and I argued the most, but his vision is absolute. Rigid, even. I absolutely trust his judgment (which is not to say I always agree with it). It doesn’t get any realer than Michael Gira. He is unlike anyone I’ve ever worked with. He can be a major pain in the ass. I love him dearly.

Michael has compared you to the likes of Bob Dylan and Willie Nelson. Any pressure there?
That’s just hyperbole. I do think Uncle Mike occasionally believes that, but he’s far too generous. He’s just trying to keep me out of tech school, is all. I’d be happy to be mentioned in the same breath as Rennie Sparks, Chris Flemmons, Simon Joyner, Timothy Bracy, Dan Bejar or Cass McCombs. That’s a sort of greatness I can reasonably aspire to, because all of those songwriters are so damn good they make me want to quit and/or try much harder. Dylan and Willie are like aliens. You can’t really go near that. Ditto Lou Reed.

You are going to be opening for Swans next year. Are you a longtime fan of the band?
Oh, yes! I’m very fond of saying that I wish I could go back and tell 16-year-old James about all of this Young God business. He wouldn’t believe it. Then I’d tell him that 32-year-old James is also usually broke and has no health insurance. That he’d believe. But yes, I’m a longtime Swans fan. I think “Failure” is a perfect goddam song. Don’t you?

Sure. Members of Lambchop, Silver Jews, Mercury Rev and others play on Death Seat. How did you hook up with all these musicians?
The same way any artist who’s spent 12-plus years on tour and holed up in recording studios hooks up with his peers and contemporaries: very naturally. You form kinships with people as you roll along. Mutual respect and admiration eventually morph into bonafide relationships, and it’s one of the greatest things about doing this. You find you begin using similar vocabularies (“Dude, you know that part on the second Area Code 615 LP where the harmonica kinda goes ‘deh deh deh’?”). You suffer the same indignities. You share similar goals. Every tour is like a bizarro world high school or family reunion where everyone is cool.

Is it true you had 72 songs written for the new album? What are you going to do with the 60 that didn’t make the record?
You’re off by a hundred. There were 172 songs we listened to, though very few were written specifically for this album. Some date back as far as the ’90s. The 172 I brought to Uncle Mike were just the ones I didn’t feel shy about letting him hear. Look, I’m not trying to brag, but I can write a song on command. It’s something I was born with the ability to do, for better or worse, and I’ve just managed to get pretty good at it. I could stop writing right now and still have enough material in the archives to release an album a year for the rest of my life. Some of ‘em toward the end would inevitably be pretty crappy, though.

I asked your publicist if there was anything else going on with you that wasn’t in your bio or press materials, and he said, “Nope … All he does is play guitar, make records and play gigs.” So you’re a workaholic, huh? Has that always been the case?
That’s not entirely accurate. I work off and on doing odd jobs like painting, flooring, roofing, home remodeling, etc. Anything quit-able is ok with me. I do this to supplement my “income” (hardy har har) as a musician, and I’m naturally drawn to jobs that enslave my body but leave my mind free to write songs and short stories. I also like the fact that the employers at these types of jobs rarely do background checks.

The last time we spoke to you, you said, “I may roam a bit, but I’m planning on dying in Tennessee, one way or another.” You now live in Lexington, Ky. How come? Just roaming a bit?
Damn, MAGNET, callin’ me out and shit. Well, if I had my druthers, I’d still die in Tennessee. It’s my adopted home, and I feel very comfortable and happy there. But I fell in love and got married to a gal who happens to be a Ph.D candidate here in Lexington, so we’re tethered here for at least a few years. We sorta hate this town, though, so we’ll leave the first chance we get.

You guest edited our website last year with Timothy Bracy when you guys put out the Jescos’ record. What is the status of that band these days?
Dormant, unfortunately. We’re all spread out geographically, so rehearsing, recording, etc., is impractical at this point. We put out what I thought was a great single on the great People In A Position To Know label, and no one seemed to notice. We got some insultingly lowball offers from some indie labels to put out the full-length, so for now we’re sitting on it. It’s a great band and I do believe its best days are ahead of it, but we’ll have to see.

During your guest-editing stint last year, you wrote about Boston terriers. I own a Boston named Higgins. What makes Bostons the best breed of dog?
As I said, they always appear to be in some state of abject panic, and I find that uproarious. I find it impossible to maintain a bad mood around a Boston terrier. I think Higgins is a hilarious and awesome name. Named after Magnum’s butler, I hope?

Actually, after Henry Higgins from My Fair Lady, but he came with the name. You also wrote about the Swedish movie Let The Right One In. Have you seen the American remake, Let Me In, which came out this year?
Not yet, but I’m curious. I’m expecting it to be awful. I may rent it, but, you know, why would you remake such a perfect film? Then again, why would you make a movie of The Honeymooners and cast Cedric The Entertainer in the role of Ralph Kramden? And why would any studio greenlight such an abomination? This is a rabbit hole, MAGNET.

Aside from the tour with Swans, what do you have going on in the near and distant future?
European tour right before the Swans dates, more writing, more recording, more drinking, more hard labor to sustain it all. This is the business I have chosen.