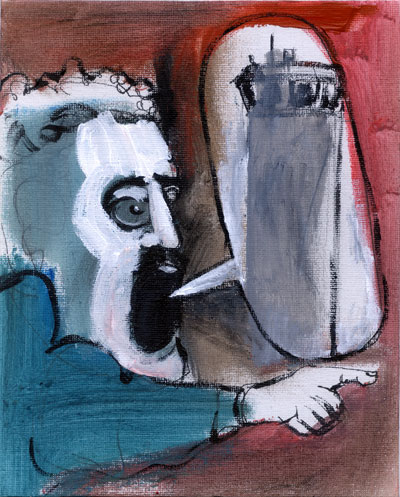 Every Saturday, we’ll be posting a new illustration by David Lester. The Mecca Normal guitarist is visually documenting people, places and events from his band’s 27-year run, with text by vocalist Jean Smith.

Shoulder-length strawberry-blonde hair, black skirt and matching jacket, Wall Street stockbroker Veronica Dorval strides through a slant of late-afternoon sunlight, dust rising at the heels of her chestnut-brown riding boots. Her slightly wrinkled white silk blouse is closed at the neck with an antique cameo pin. Walking from the barn toward the grandstand, now filling up for Friday-evening harness racing in Nazareth, Pa., Veronica enjoys the increasing volume of the crowd. She had hoped to find her father in his trailer at the back of the barn, but he wasn’t around. Door open, she’d gone in, written a note on the back of a grocery receipt and left it on his kitchen table between an open jar of Smucker’s strawberry jam and a loaf of Wonder Bread protruding from its red, yellow and blue dotted bag.

Fighting the urge to put the lid on the jar, to lift the bag by its open edges and twist it closed, she’d walked out, leaving things as they were. In her mind, she could hear the metal lid’s spiral ridges turning against glass enticing her. Progress, she thought as she walked back through the barn, listening to her boots echo on the concrete floor. She could see the jam-sticky knife and plate in the sink, but she’d managed to leave them alone, without washing them. Without even running water on them. Progress, but yet she had a very strong urge to go back, to at least put the bread away.

“I don’t know why you’re wearing riding boots, Ronnie,” says Blaster, heading to the barn with a broom. “You couldn’t even get on a horse in that skirt.”

Veronica laughs and shakes her head, not so much at Blaster’s comment, but at his outfit. Red jumpsuit under a woman’s floral housecoat flapping around his knees as he lurches across the track in purple cowboy boots. If Veronica had wanted to get on a horse, she’d bloody well hike up her skirt and get on a horse. Blaster couldn’t imagine her getting on a horse because, after the accident, Blaster didn’t have a mind’s eye. He considers himself lucky, though. He wasn’t supposed to live past 12. That’s what the doctors told his parents after electrical frequencies ran through his brain for 40 minutes.

Veronica and Blaster had been best friends before the accident. After the accident, he was different. Eccentric and anti-social. Thinking he only had two years to live, his parents bought him a motorcycle, a 90cc Yamaha and everyone—including the cops—turned a blind eye to 10-year-old Blaster Swanson ripping around town without a helmet. As far as anyone knew, he only had two years to live. The general consensus was that Blaster should pack as much life as possible into that time.

Blaster started making a connection between sound frequencies and color. He began wearing the crazy outfits. It wasn’t that he wanted to wear women’s clothes specifically, he’d told Veronica, but he needed the bright colors to match the sound waves, the frequencies in his head. They didn’t sell boy’s clothes in the color frequencies he needed—at least, not in the shops of Nazareth, Pa., in 1965.

He probably still considers her a friend, thinks Veronica as she walks out into the parking lot behind the grandstand. She tries to imagine what it would be like not to have a mind’s eye, not to be able to place images in her head at will. Stamping her boots on the pavement before getting in the rental car, she can’t imagine not creating picture associations to words and stories. It is very difficult for her to empty her mind, to let go.

As significant as scent and taste, what would be lost or gained with the disappearance of the mind’s eye, she wonders. For the most part, Blaster cannot say. Veronica listens as she turns the ignition key. The local radio station comes on, rendering the four-cylinder engine of the Kia Optima inaudible. Instinctively, Veronica touches the gas. The engine noise increases, drowning out Dire Straits. She takes her foot off the gas and puts the car in reverse.

Blaster is a fixture at the track, a real character. Her father’s a fixture, too, having been there even longer, a groom, sequestered in his trailer. As a little girl, when she told people that her father was a groom, she got a picture in her mind of the tiny plastic man on top of the display wedding cake in the bakery window on Main Street. Veronica assumed that everyone else got that same picture, too. If she said groom, everyone saw the tiny man in the black suit, his face a featureless smudge representing the universal male reaction to marriage. A sort of suck-it-up expression.

Veronica had never wanted to get married. Her parents bickered ceaselessly until she was a teenager, and her father began staying in the trailer at the track. Tension dissipated in his absence. A male presence in her life wasn’t something Veronica considered desirable, let alone essential.

After learning that not everyone had a mind’s eye, Veronica noticed that Blaster seemed unaware of what it was he was missing. He went very quiet word-wise, wrapping himself in the warm frequencies of the modified muffler on his motorcycle and the sputtering hum of his electrical projects in the basement next door to Veronica’s house where he’d built solid-body electric-guitar prototypes for the Martin guitar company. The Martin brothers themselves came and went, checking in on Blaster’s latest inventions. After the accident, Blaster sat on an upended fruit crate, fully engaged with the minimal range of sounds he got out of a guitar amplifier, a 1950-something Fender Champ. He poked tiny holes in the speaker cone and listened to variations in the distortion he created.

“Don’t you want to play your guitars any more?” Veronica had often asked Blaster, frustrated by the digression in his evolution. Blaster always shook his head. No. It seemed to Veronica that the physical world became the instrument that Blaster listened to. Walls, ceilings and windows in the basement, noise bouncing back at him as he rode his motorcycle through the streets of Nazareth—sound wave against surface seemed to be the instrument he played.