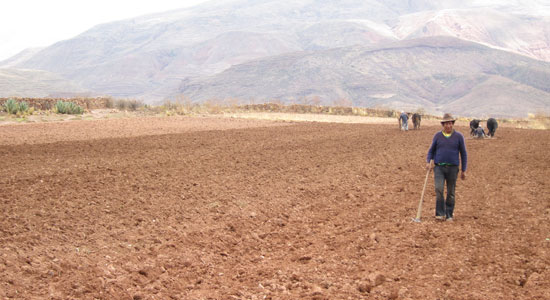 Cockburn: I like drinking wine. I’m currently trying to train myself to like pinot noir. I’ve never cared much for it, but so many of my friends and acquaintances do that I feel like I ought to understand what all the fuss is about. Pinot noir also contains the largest proportion among wines of resveratrol, the antioxidant that makes wine so good for you. I’ve now had a few that have gone down well, though some are too light and watery for my taste. Gimme the big wines, zin and merlot and amarone! Nothing brightens a day like well-chosen booze.

In Bolivia recently, my daughter and I were invited to help a number of Quechua villagers with their planting. Though it sounds like work, it was actually a social invitation. The custom is that all who work get fed and plied with chicha, a mildly alcoholic brew of corn, questionable water and, since everyone drinks from the same vessel, saliva. We arrived a bit late. Lunch was served, and we shared in it. A farmer mimed to me that if I didn’t do some work for my food and drink, I’d have to sing and dance for the crowd. This prompted me to grab a pickaxe and join him and the other men in crushing clumps of earth not sufficiently smashed by the bull-drawn plough. After 10 minutes of walking the furrows and slamming the pick down sideways on the thick clods, it was back to the shade and the pots of various forms of potatoes and corn. The men sat off to one side while Jenn and I sat with the women and kids, as she was acquainted with most of them and my Spanish is not up to chatting about the price of llamas or football or whatever the men were talking about. Jenn, on the other hand, had been living with these folks for six months and was able to communicate well in Spanish and their own Quechua tongue.

The boys were serving themselves drinks from a clear-glass gallon jug. Something other than chicha. One of them waved the bottle in my direction. I nodded back at him. He came over and poured me a glass and waited while I drank. It was fiery and smooth, like a fine grappa. The day was already bright. It got noticeably lighter …

3 replies on “Bruce Cockburn May Change Your Mind: Alcohol”

Recalling a time, in a torch-lit tavern by a Finger Lake, the one with the peace sign. I wasn’t sure what I recalled, but I remembered it with gladness. I was feeling rather ‘Thick as a Brick’, but that’s often the case… I had a Molson Canadian, having not been in the mood for wine. I think a friend had a Dr Franks, though I think it was a Merlot.
Odd, these memories came back clearly just recently during a time of reflection. I can’t say why. Perhaps it’s time, as I have nothing else left to give. I didn’t understand then. I’m not sure I do, even now. I’m sorry, please forgive me.
Love still rules,
Peace

Bruce, you are wrong! Given that 2.5 Million World Wide Die and Millions upon Millions are assaulted, permanently maimed and of most concern to me, at least 1 baby is born forever maimed, handicapped for life, via the tragedy of Fetal Alcohol Spectrum Disorder – “Wounded in the womb” – via the teratogenic impact of alcohol.
Alcohol negates the chemical in the brain that is it’s roadmap for your brains development. Your brain continues to develop until at least the age of 23 if not 25.
After that date has been reached, binge drinking still damages the brain.
Many ask: But I drink responsibly, that will never happen to me. This is naive to say the least. Reason: Alcohol is Addictive.
Move onto violence. With a large amount of alcohol in your system, the psychoactive nature to alcohol takes over. If someone smiles at you, your inebriated brain will process your observations and think that someone is attacking you in an aggressive manner. Hence you may react instinctively with violence. Our Jails are full of one punch homicides. Taking up space for a prison bed that should be reserved for life time criminals.
Millions are suffering because of the sales pitch sold to them via Big Liquor.
An approach as aggressive as what we commonly throw at Big Tobacco is now needed.
To sum up, Alcohol is a toxic, carcinogenic, teratogenic and heavily addictive recreational drug.
Any one of the above would ban in outright if invented today. Such a prohibition isn’t possible today. What we do need to do is not, intentionally or unintentionally promote consumption of this liquid.
Regards
Mike Cockburn, The Pedestrian 08 Campaign, Melbourne, Australia

Correction. FASD affects 1 in every 100 births in most western countries today. Aboriginal folks, after so many hundreds of years of dispossession, disease, etc, the final insult may be to inflict FASD to anything up to 1 in FOUR babies…