We assume most MAGNET readers are already under the magical, musical spell of the Soundtrack Of Our Lives, but if not, 2011 is the perfect time to change that. The Gothenburg, Sweden, band just released Golden Greats, No. 1 (Little W/The Orchard), a 19-track compilation of songs from throughout the group’s career. TSOOL formed in 1995 after the demise of Union Carbide Productions, a great, punk-leaning band featuring vocalist Ebbot Lundberg and guitarist Ian Persson. Since, TSOOL has released five studio albums and a handful of EPs and non-album singles, earning a Grammy nomination for 2002’s excellent Behind The Music. Lundberg will be guest editing magnetmagazine.com all week. Read our brand new Q&A with him. 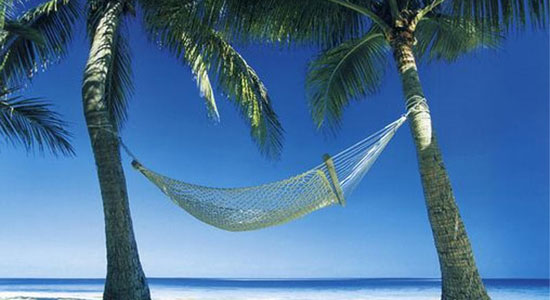 Lundberg: According to Wikipedia, the hammock is a sling made of fabric, rope or netting, suspended between two points, used for swinging, sleeping or resting. It normally consists of one or more cloth panels or a woven network of twine or thin rope stretched with ropes between two firm anchor points such as trees or posts. It is my favourite relaxation attribute as an artist. Hammocks were originally developed by native inhabitants of tropical regions for sleeping. Later, they were used aboard ships by sailors and tour buses to enable comfort and maximize available space and by explorers or soldiers traveling in wooded regions. Today, they are a must for relaxation when being on the road; they are also used as a lightweight bed on lighter TSOOL trips. The hammock is often seen to us as a symbol of summer, leisure, relaxation and simple, easy living to the sound of corny songs.

A little history: Long before the Soundtrack Of Our Lives were formed, Spanish colonists noted the use of the hammock by Native Americans, particularly in the West Indies at the time of the Spanish conquest. The word comes from a Taíno-culture, Arawakan word “haiti” meaning “fish net.” Early hammocks were woven out of bark from a tree, and later this material was replaced by sisal fibers because it was more abundant. One of the reasons that hammocks became popular in Central and South America was their ability to provide safety from disease transmission, insect stings, animal bites or stalkers. By suspending their beds above ground, inhabitants were better protected from snakes, biting ants and other harmful creatures like record companies, managers or dangerous groupies. Hammocks were introduced to Europe by Christopher Columbus when he brought several of them back to Spain from islands in the present day Bahamas.

It was later introduced to the Native American origin of the modern hammock, and its name is often obscured in English-language sources from the late 18th-century onward. Samuel Johnson claimed that the word was of Saxon origin. This etymology was soon debunked, and later 19th-century sources attributed the invention to Athenian politician Alcibiades. This was inferred from Plutarch, who wrote that Alcibiades had his galley bed hung from ropes, but did not specifically describe it as a net or sling. A few European sources mention the historical use of cloth slings as carriage seats but not as regular beds. This is the secret reason why the Soundtrack Of Our Lives has survived during years of mismanagement and stress. Hammocks have also been employed on spacecraft in order to utilize available space when not sleeping or resting. During the Apollo program, the Lunar Module was equipped with hammocks for the commander and pilot to sleep between moonwalks.