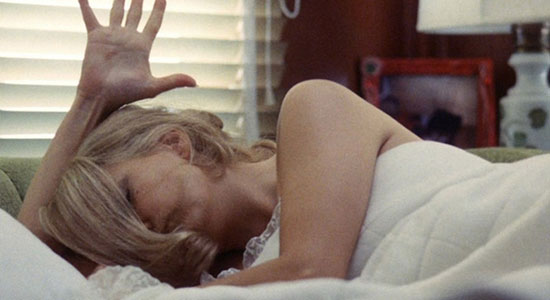 My mother was a Stanford graduate, and the last thing she wanted to do with her life was stay home all day and raise four boys in the San Francisco suburbs. Gena Rowlands’ brilliant work in John Cassavetes’ harrowing A Woman Under The Influence is so accurate, it could have been researched by spending an afternoon with my mom, splitting a pitcher of martinis. Rowlands had all her moves down, especially the little vocal explosions with the awkward gestures.

To the sound of an operatic baritone in full flight and a dissonant, Thelonious Monk-like piano, Nick Longhetti (Peter Falk) in a floppy black hat and leather-sleeved high-school jacket leads a work crew of men staggering hip-high up a creek to fix some problem for the Los Angeles Water Department.

Afterward, everyone gets into a wooden-slatted flatbed truck and heads straight to the Crest Cafe for a beer. Nick is immediately on the pay phone, yelling at his supervisor who wants the crew to jump on another job. “No, I’m with my family tonight,” he says. “There’s no way we’re gonna work tonight! Forget about it!” He slams the phone down hard to the applause of his entire crew.

At Nick’s suburban Los Angeles home, Mabel Longhetti (Rowlands) is ushering their three kids into Grandma’s car so she can spend the weekend with Nick. “Tony, don’t yell at the others,” says Grandma (Lady Rowlands) to the oldest, about nine. “Your mother is terribly nervous, and I don’t want anything to go wrong.” “Angelo, where are your shoes? You can’t go without your shoes. Maria, have you got your pajamas?” demands Mabel. After losing a sandal on the front lawn, she hops up the driveway to retrieve Angelo’s bicycle and jams it into the trunk.

“Wait a minute, mother,” says Mabel as her mom rolls down the window. “If anything happens, I want you to call me, day or night. I don’t want any slip-ups. I don’t want you getting chicken-shit and not calling.” Her Mom protests weakly, “Oh, darling, I can take care of them.” Mabel continues, “I don’t want you saying, ‘Oh, Mabel’s having a wonderful time. I don’t want to disturb her’ while one of my kids is lying there bleeding!” Mabel walks out into the busy street like a traffic cop and yells, “OK, go!” as her mom backs up, then kills the engine. “I shouldn’t have let ’em go, I shouldn’t have let ’em go,” Mabel mutters as she walks up the front steps.

When this film was released in 1974, Time Out London wrote, “Rowlands unfortunately overdoes the manic psychosis at times and lapses into a melodramatic style which is unconvincing and unsympathetic.” That’s a perfect example of what happens when you write about something you know absolutely nothing about.