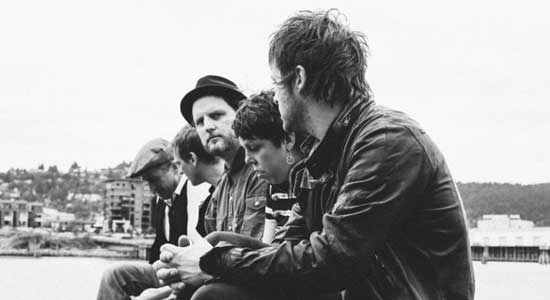 Casey Neill & The Norway Rats is made up of members of the eels, the Decemberists and Black Prairie. The Portland, Ore., band’s latest release is All You Pretty Vandals (Incident/Redeye), which is out now. Says Neill, “We’re further cementing our indie-rock supergroup status. Like a very obscure Asia or maybe the Firm.” We asked Neill to make us a mix tape, and he rose to the occasion. Check it out below.

PJ Harvey “This Wicked Tongue”
Every record of hers has a pile of b-sides that are just as good as the actual album. In the case of Stories From The City/Sea, there is an entire record worth of brilliant outtakes. Video

Joe Strummer & The Mescaleros “Ramshackle Day Parade”
Strummer revives “The Street Parade” with this dreamy track released on Streetcore after he passed away. The tragedy of his death made all the worse by the fact that it cut short an incredible creative resurgence. Each Mescaleros record got more mind-blowing. I find myself listening to them just as much as any Clash record. Video

Three Shades Of Dirty “Once Upon A When”
I covered this on my CD Brooklyn Bridg’. It was originally called “Dancing Song.” Three Shades Of Dirty were a band Dan Littleton formed after the Hated broke up, and they released one cassette. He went on to form Ida. There was talk of rereleasing the entire Hated catalog, which really should happen. This song is one that has been with me my whole life. Video

Bobby Womack “California Dreamin'”
You think a song is one thing, when it turns out it can be something else entirely. What seemed to me like a bit of ’60s fluff is turned into a deep-soul workout by one of the masters. Video

The Minus 5 “Lyrical Stance”
I’ve played this as a moonlighting member of the Minus 5 and also covered it with the Norway Rats. Scott McCaughey wrote it with Jeff Tweedy and Peter Buck. It’s on the At The Organ EP. The last verse with the repeating “I’ve got a couple of chords” line is the one verse that just stays on one chord. Fucking awesome. Look for the new Minus 5 project: Scott The Hoople In The Dungeon Of Horror. It’s five LPs and 55 songs! Video

R.E.M. “Leaving New York”
I love NYC songs. It’s weird to me how a band this huge could be underrated but R.E.M.’s last decade is just that. Any upcoming band would die to have made records as good as Up, Reveal, Around The Sun, Accelerate or Collapse Into Now. This song should’ve been a huge hit. The “leaving was never my proud” line kills me. Video

Van Morrison “Summertime In England”
I have a big soft spot for ’80s Van Morrison. This 10-minute light-soul workout finds the Belfast Cowboy listing his favorite poets. Most of it seems to be about Coleridge and Wordsworth in the Lake District. But Mahalia Jackson also shows up in the lyrics, too. Van has a great look going. The call-and-response bit at the end is the payoff. Video

Lungfish “Armageddon”
Lungfish never put this on a record but played it consistently. I am guessing it’s the “a music that is spoiled by recording” line Higgs and Co. were sticking to. Friends of mine in Olympia in the ’90s all loved them and we’d see them every time they came through. Years later, I’d catch them when I was living in NYC. Everyone in the crowd looked like my friends in Oly, and I wished I knew them all. Being a Lungfish fan is like that: You have something rare in common that seems to come with a certain world view. Wheels within wheels without end … Video

Survival Knife “Divine Mob”
A new band from Justin and Brandt of Unwound. They’ve put out a couple seven-inches. Their full-length comes out this year, and it’s going to crush. I promise. Audio

New Model Army “Here Comes The War”
Crossing Missouri this fall, I played about two hours of NMA in the van for my band. Some of them had never heard them, and the guitar player, Matt Brown, said they sounded like “the band you wish U2 had become after War.” Of course, they come from exactly that era but since then have released amazing record after amazing record. It’s hard to choose a single song but perhaps this one because it is the first one I ever heard. And because this video is savage. Video

Houndstooth “Canary Island”
My favorite Portland band at the moment. Ride Out The Dark is their debut. Lovely stuff. Video

Half Man Half Bisquit “National Shite Day”
Jon Langford is responsible for alerting me to this. If I need to be cheered up, this is my go to. It might take a certain amount of anglophilia to appreciate the humor. Embrace the margin. Video

Black Prairie “How Do You Ruin Me?”
One of the coolest and most innovative acoustic bands out there. This song by Annalisa Tornfelt is off A Tear In The Eye Is A Wound In The Heart. Dig John Moen’s drum groove on this. These are my dear friends, bandmates and collaborators. That said, if I had never known any of them, this music would blow me away. Video