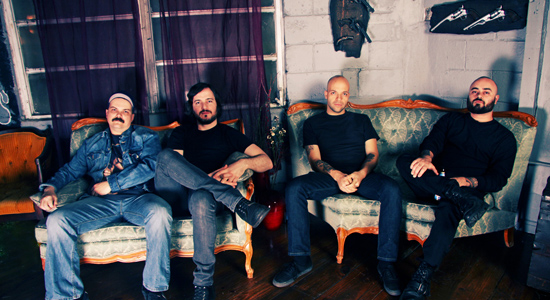 The doom-pop heroes in Torche are reignited, and it feels so good

Back in 2005, when Torche unleashed its debut helping of thunderous doom-pop onto an unsuspecting world, guitarist/vocalist Steve Brooks’ former band, Floor, was dead and buried. Sure, with Brooks fronting both, and drummer Rick Smith competing with Robotic Empire (which released Torche) label boss Andy Low for the crown of World’s Biggest Floor Fan, there were bound to be sonic similarities, but never again would Brooks’ former and present bands compete for his time and attention.

“It probably crossed our minds a couple times, the idea of Floor blowing up and Torche taking a backseat,” says Smith, “but I was actually welcoming Floor being busy so I could have some time at home.”

Even before Floor reconvened, the amount of time available for Torche’s writing and rehearsal activities was at issue. It’s a juggling act Torche has been at since 2008 when members started moving away from the band’s Miami home base and keeping the balls in the air had become trickier due to a combination of recording technology, luxuriously fast electronic communication and guaranteed-lowest-airfare travel websites.

“I always think we should have more time to write and record,” says Smith. “Especially to write and rehearse the material before we record it. Since we’ve all been in different cities—me and (bassist) Jonathan (Nuñez) are in Miami, Steve’s in San Francisco, and (guitarist) Andrew (Elstner) bounces between Kansas City and Atlanta—I’ve always found it a pain in the ass getting together. A lot of it is that our studio and gear are here in Miami. When we started the band, it obviously wasn’t like that, but around the time Meanderthal came out, Steve and (ex-guitarist) Juan (Montoya) moved to Atlanta. Then, Juan was out of the band, we were a three-piece and I was living in Gainesville, which is about halfway between Atlanta and Miami. That was probably when we were at our most well-rehearsed, because we met up in Gainesville and practiced all the time.

“Since then, we haven’t been able to full-on rehearse the songs before going in to record them. The last couple of records have been put together in a way that we don’t get to work the kinks out super-hard before recording, and this was probably the most like that. I’m not saying it’s bad; it’s just a different way of doing things, and with everyone being so spread out it makes it hard to do it any other way.”

The approach involved in organizing this musical jigsaw puzzle has its stamp all over new album Restarter. The band’s fourth packs in all the familiar elements, but does so with a looser, more somber tone and sullen mood. It’s more Black Sabbath than brown sugar, so to speak.

“It is a bit of a downer,” says Smith. “It’s way darker, and the heavy songs have almost more of a doom-metal vibe to them, even vocally. It sounds like us, but it’s a little different. It’s a direction I didn’t know we were going to go in when we first started writing. The material sounded one way when we started, and by the time we finished, it sounded different.”