The Light In You—Mercury Rev’s 10th full-length and first in seven years—picks up where 2008’s Snowflake Midnight left off, with stalwart founders Jonathan Donahue and Grasshopper drawing inspiration from nature and the Rubik’s Cube of love in equal measure. There is a strong autumnal vibe about the affair—a modern Days Of Future Passed, complete with sweeping orchestral touches and wistful remembrances by the fistful. When the band’s “psychedelic rock and blue-eyed soul” finds its groove, it’s still a breathless wonder to behold. Mercury Rev will be guest editing magnetmagazine.com all week. Read out MAGNET Classics feature on the band’s Yerself Is Steam. 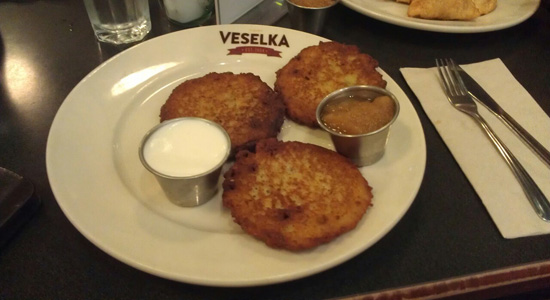 “It’s one thing to have delicious food. It’s another thing to have it available 24 hours a day. Veselka has always been there when I’ve had a 3 a.m. pierogi emergency.” —Jon Stewart

Grasshopper: For more than 60 years, Veselka, a Ukrainian coffee shop in NYC’s East Village, has served pierogis, borscht, goulash, blintzes, kasha, poppy-seed cake, kielbasa, stuffed cabbage (or as Grandma Mackowiak called them: golumpki) and many other delicious treats. (Now many of the dishes are served vegetarian!) They also have a fine selection of Polish, Czech and Ukrainian beer. I’ve seen people there from Jackie Mason, to the guys in Longwave, to Jon Spencer. If you can’t make it to NYC, pick up The Veselka Cookbook, in which owner Tom Birchard shares many of Veselka’s famous recipes, as well as great stories from this East Village landmark treasure. If Putin had his way, I’m sure he’d invade this restaurant in a heartbeat to fill his belly with this great comfort food. (Or maybe he’d just steal the cookbook.)