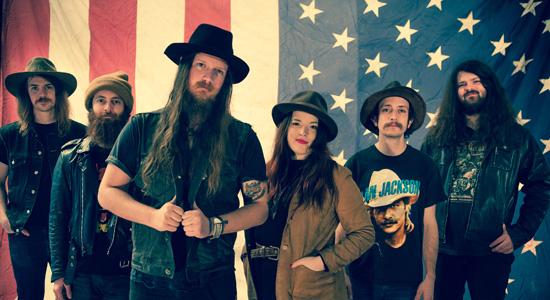 Cook: Our new label, Bloodshot Records, is fucking awesome. And when I say “awesome,” I mean the best label in the world. They have a roster that we’re super psyched to be on, and we can’t wait to hit the road and tour hard behind our new album American Man, which is out now. That said, here’s a rundown of some of my favorite Bloodshot albums from their extensive and killer catalog:

Banditos, self-titled
These guys are crushin it right now. Go see them live, immediately. Even if you have to drive way too far to do so.

Bobby Bare Jr, Undefeated
An album about being broken up with; a little perspective twist that you don’t hear from very much. Gem after gem after gem.

Lydia Loveless, Somewhere Else
Pretend like there’s another album that hits you in the gut like this.

Cory Branan, Mutt
This guy is a songwriting genius, and this is the evidence you need to prove that I’m not full of shit.

Robbie Fulks, Gone Away Backwards
Being witty as hell can do wonders for your social life, but if you can find a way to pair it with putting together exceptional songwriting, beautiful lyrics, and class-A performing skills … well … you get this album.

Waco Brothers, Cowboy In Flames
The title is enough to make you love this thing.

Ha Ha Tonka, Death Of A Decade
Combining some lush vocal harmonies with Southern indie rock. This album can stay on the player for days.