They Might Be Giants have resurrected their ingenious Dial-A-Song concept by streaming a new song each week of 2015 at www.dialasong.com. MAGNET’s Matthew Fritch reviews them all.

They Might Be Giants conclude their 2015 Dial-A-Song odyssey with “Shape Shifter,” the 52nd weekly entry. If you happen to despise TMBG yet are somehow hate-reading things such as this on the internet for fun, “Shape Shifter” may represent a portion of your distaste for the band. It’s “whimsical” (the opening vocal can easily be mistaken for Weird Al) and a little showtune-y and difficult to encounter while uncaffeinated in the morning.

And now it’s time for Phoning It In to hang it up. There have been mistakes, offenses, misreadings and acts of unfairness over the course of the year. We have some corrections, apologies, and caveats: The table below lists all the songs with final, adjusted ratings. We did not consider any of the more than 20 bonus songs issued to Dial-A-Song subscribers. The videos accompanying each weekly song were not viewed so as not to skew the impression of the music. No offense to the artists who created those videos; this was just a music-based critique. Sorry for trying to pit the two Johns against one another. Sorry for the summer slide. Sorry the chart below is nigh unreadable. Sorry for the constant disclaimer of “I’m not a TMBG superfan, I’m a normal person.” There was nothing normal about this. #sorrynotsorry about everything else. 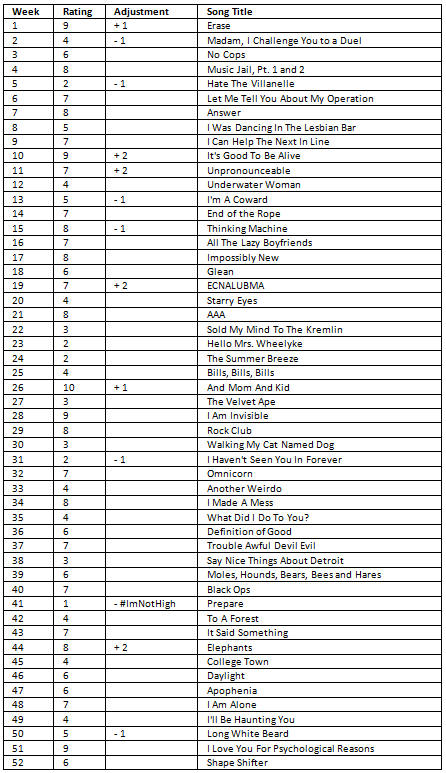 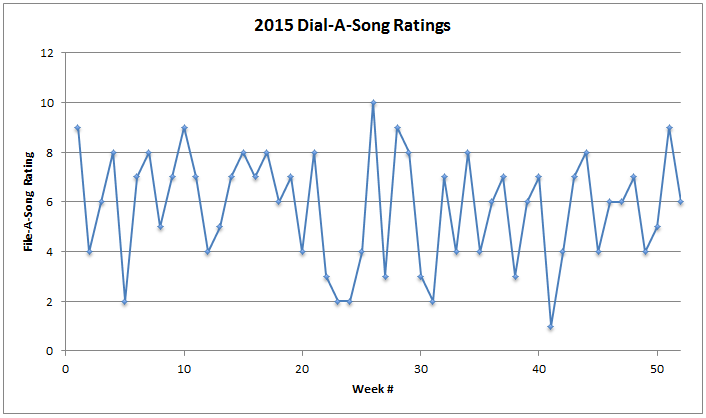 Finally, Phoning It In acknowledges the herculean effort put forth by They Might Be Giants this year. Three or four albums could have easily sprung from this material (two actually did, Glean and Why?). We think criticism facilitates discussion and signals importance (though we’re clearly not certain of that point). Laser-focused microcriticism over an entire year facilitates and signals a) listener fatigue and b) complete awe of the creative powers of They Might Be Giants. Never mind Satan, all hail Dial-A-Song.

Phoning It In, over and out.