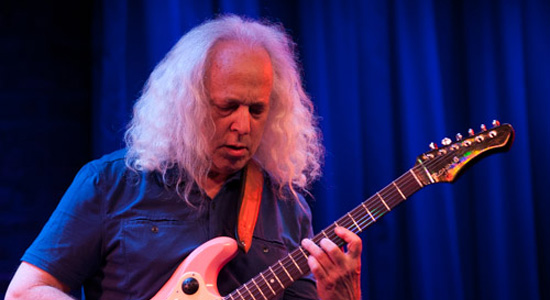 The 12th annual NYC Winter Jazz Fest is this week, with most of the action happening in Greenwich Village via a marathon series of showcases with more than 100 acts and a dozen different venues. The fest has grown steadily since its inception, and the organized quality of this art extravaganza now draws music seekers young and old with an appetite for cultural experience and a varying interest in jazz. To curate well is the key, and the organizers of the WJF seem to have that part figured out pretty well.

Among many events presented at the WJF are two full nights devoted ECM Records, the European record label guided by Manfred Eicher that’s been presenting improvised music for more than 40 years. While its back catalogue includes countless classic LPs by the likes of Keith Jarrett, Chick Corea and the Art Ensemble Of Chicago, ECM has managed to stay up to date and it’s current roster consists of many notable musicians. Friday night’s ECM presentation included the celebrated Vijay Iyer Trio, keyboard whiz Craig Taborn solo (and in trio), and Israeli trumpeter Avishai Cohen’s current quartet.

Veteran guitar genius David Torn opened the ECM evening, performing an atmospheric solo set that was introspective and inspiring. Torn has been an ECM artist for more than 20 years and is an adventurous musical spirit with focused concentration. Working an electronic gizmo that processed a maelstrom of sound, Torn didn’t even touch the strings of his guitar for the early minutes of his showcase. Twisting knobs and working an array of foot pedals, he played a lengthy instrumental before explaining to the audience, “That was a song about clocks.” It’s not often that I get to reference musique concrète and a whammy bar in the same sentence, but that’s David Torn.

The Mark Turner Quartet followed Torn’s performance, and saxophonist Turner led his evocative jazz band through a set of new compositions as well as material from their 2014 ECM release Lathe Of Heaven. Accompanying Turner was ECM stable-mate Avishai Cohen, bassist Joe Morton and the amazing Marcus Gilmore on drums. As ever, Turner is one to watch.

Meanwhile, over at (le) Poisson Rouge (on Bleecker Street), the Sex Mob celebrated itself and 20 years of canny improvisation, clever humor and cover tunes that you know and love. Led by slide trumpeter/master of ceremonies Steven Bernstein, the Mob titillated the crowd with their unique New York values and muscular musicianship. Drummer Kenny Wollesen was amazing, and his rhythm partner Tony Scherr was rock solid, while altoist Briggan Krauss was a perfect counterpoint to Bernstein’s outlandish trumpet stylings. WJF organizer Adam Schatz presented the band by saying, “Sex Mob makes every day like a Bar Mitzvah.” How can one argue with that? Brooklyn’s own party-hearty Red Baraat followed the Sex Mob set, bringing their North Indian Bhangra/rock/jazz/funk concoction to a roomful of appreciative, dancing converts.

Another standout who must be mentioned is keyboardist Marc Cary’s Indigenous People, who played at the New School Jazz venue on West 13th. Blending electronic keyboards with a front line of horns, reeds, violin and vocalist as well as a rhythm section featuring one drummer and two bassists, Cary led his diverse group through an ecstatic set of original compositions, as well as an adaptation of poet Langston Hughes’ immortal poem, “Harlem (A Dream Deferred)” that had the crowd mesmerized and moving. Add to all this a surprise special show featuring the contemporary jazz trio, the Bad Plus, and you know the 2016 NYC WJF is already being considered a total success. Stay tuned.