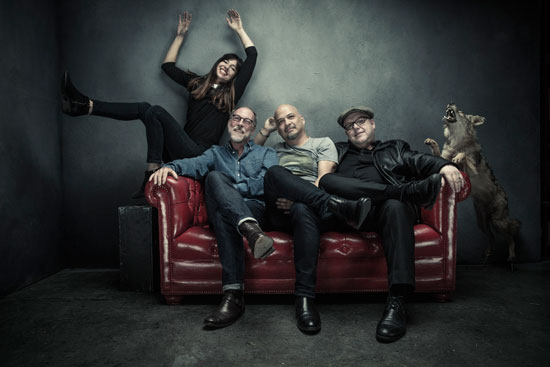 Head Carrier is the new Pixies album, due out from Pixiesmusic/Play It Again Sam on September 30. The band has also announced the addition of bassist Paz Lenchantin to its permanent lineup … Robert Pollard will release the 20th anniversary reissue of his first solo album, Not In My Airforce, on September 9 via Guided By Voices Inc. In the meantime, he’ll be touring with GBV across the U.S. … UMe will reissue three Sonic Youth albums—Murray Street, Sonic Nurse and Rather Ripped—on July 15 … The first-ever recordings by the Beach Boys from 1961-62 will be available for the first time as Becoming The Beach Boys: The Complete Hite & Dorinda Morgan Sessions. The 62-track collection will be released on August 26 by Omnivore … On September 23, Devendra Banhart’s new album, Ape In Pink Marble, will be out via Nonesuch … Home Wrecking Years is the new solo album from Broken Social Scene’s Brendan Canning, set for an August 12 release on Arts & Crafts … Tig Notaro’s HBO special Boyish Girl Interrupted will be available on vinyl/CD/and digital formats from Secretly Canadian/Bentzen Ball Records on August 19 … John Varvatos/Republic will issue the new Amos Lee album, Spirit, on August 19 … Two seminal Soundgarden albums, Louder Than Love and Down On The Upside, will be reissued August 26 by UMe on 180-gram vinyl … August 19 will see the release of Ed Harcourt’s seventh album, Furnaces, via Polydor … False Readings On, the latest LP from Eluvium, is set for a September 2 release on Temporary Residence Ltd. … The Chills’ 1986 album Kaleidoscope World will be reissued as a deluxe two-LP and CD set from Flying Nun on August 19 … Rhino has announced the July 22 release of a new boxed set, A Decade Of Dio: 1983-1993, which contains Dio’s first six studio albums … The 11th album from Neurosis, Fires Within Fires, will be available September 23 via Neurot … Boyz II Men’s Cooleyhighharmony debut and sophomore album II will be released on vinyl for the first time via Ume on August 19 … Dream Girl is the third solo album from Bongwater’s Ann Magnuson, due out September 16 … The Mavericks have launched their own record label, Mono Mundo Recordings, which will issue two new albums in the next year. A live LP, All Night Live, Vol. 1, will be out in October … Joyful Noise has announced the August 5 release of Cackle And Squall, the new album from Half Japanese’s Jad & David Fair.