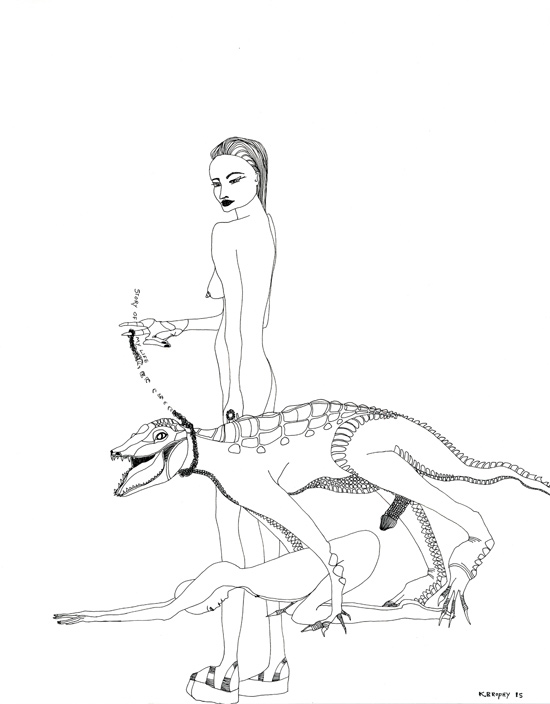 Magnuson: Kitty Brophy is an artist whose time has come. Until recently, her erotic, psychologically raw, politically charged and deeply personal art was practically unknown. But in 2017, it will be featured at the Museum of Modern Art in a show about the neo-dada cabaret/arts lab/funhouse Club 57. I first met Kitty at that club when I was the manager (1979-1980). Gorgeous Kitty was moonlighting as a model and dating artist Kenny Scharf. Kenny was among a group of art students from SVA (that included Keith Haring, John Sex and Wendy Wild) who gravitated to the club. Kitty was part of that gang, and together with many other bright young things, we ran amok. Kitty is one of the smartest, wittiest women I know and not only is she still modeling (her latest shoot, “Beautiful Mess,” in Territory is to die for!), she is making art with a vengeance. Her work has recently been shown at the Museum of Contemporary Art Tucson.

Ann: Kitty, when did you start making art?
Kitty: As soon as I could hold a crayon. I wanted to be a fashion designer or illustrator. In the first half of high school my art was more decorative- and design-oriented, and then in the second half, after I started having sex, taking drugs and drinking a lot, my art started to reflect that. I was also dealing with manic depression, which wasn’t helped by all the hormonal changes and self-medicating. So, you take all those things—plus the music of David Bowie, T.Rex and Patti Smith—and my art went from pretty and nice to disturbed, imbued with dark humor, text and poetry. The work became much more sophisticated, with more nudity and costuming of my models, and I started putting in S&M design elements where the women were in positions of power, humiliating the men who had wronged them. And I still was voted artist of the year at my high school and was accepted into seven top art schools.

Ann: Damn, you went to a more progressive high school than I did! When Kenny first showed me your early work, I was blown away! We wanted to make sure it had a prominent place our East Village West show at Royal-T in 2011. I know it was disheartening to have the male artists at the time, like Keith and Kenny, getting all the recognition but did it ever stop you from creating?
Kitty: My teachers at Parsons were not encouraging or positive about the kind of work I was creating which was very disheartening. Keith and Kenny were both very encouraging to me, and loved my art, but their careers were starting to take off and they had to focus all of their energies on that. It was an immensely creative time in all artistic disciplines, but the kind of small delicate line drawings I was doing—that dealt with issues of female sexuality, powerlessness, depression, and repression—didn’t seem to fit in with the bigger, more colorful art usually representing the 1980s. I eventually dropped out of art school. I worked as a model, paid and unpaid, in NYC and Paris from 1979-1986, but mostly in the early ’80s. When I got clean from drugs and alcohol in early 1985, I stopped doing any art for 12 years and focused more on writing.

Ann: Your art gives a strong, unashamed voice to the female libido including “forbidden” sexual urges, frustrations and anger in ways few women at the time—or even now—dare express. What were your influences?
Kitty: My biggest artistic influence was Aubrey Beardsley, who I discovered in my senior year of high school. What he did was revolutionary in terms of using ink-line drawing and various printing methods to produce art that was not only incredibly beautiful, but oftentimes sexually charged and decadent. His drawings of men walking around with gigantic penises and women looking powerful and sexy moved me away from straightforward representational depictions to a more fantastical autobiographical one; oftentimes filled with sex and violence. I saw my art and writing as a way to own my sexuality, my body, my gender fluidity, my anger, my desires, and to use it to freely express everything and anything. I wish I had known about all of the amazing women artists and the work that they were producing in the 1970s, but it was much harder to get information then and it sure wasn’t being taught in schools.

Ann: You once told me, “Most of my art comes from my ‘id,’ when the conscious part of my brain shuts down and allows the creativity and thoughts to flow freely.” This is a good description of the dream state. Do you ever work directly with your dreams?
Kitty: I have very involved, vivid, Technicolor, dreams, like movies. Through them I live in an alternative reality, much like the depiction in The Matrix. But it’s really that moment upon waking, that semi-conscious state where the ideas start to take shape. I can also get into that state late at night when there are no distractions. Or while hiking in nature. Some of my drawings and paintings take days or even weeks to fully gestate into a reality. I keep extensive art journals filled with writing, sketches, ideas, many of which I never produce. It’s not about that. I never force anything. It’s almost as if I have to go into that near sleep state while sitting in front of my paper to begin. Anytime, I plan or try to force out a vision, I end up tossing it. My art has to flow out of my hands the same way it flows into my brain, with minimal interference from my conscious self.

Ann: The Memory Card Project you participated in is great. Those are illustrated poker-sized cards that look almost like snapshots of dreams. Yours really capture the realm of the subconscious complete with a hallucinogenic desert vibe and talking reptilians! I love that they’re for sale at MOCA Tucson. Exit through the gift shop!
Kitty: Those were fun to make and are very id-oriented. I chose to mix Sonoran desert creatures with faces and text, using a limited color palette.

Ann: Tell me how your experiences in the meat market of fashion influenced your work. Did art help you survive the indignities of that industry?
Kitty: When I was a young model, I was subjected to a lot of sexism and sometimes even expected by my agents to go out with men and sleep with them (which I never did) in order to further the agency’s image. That was one of the many reasons why I eventually quit modeling. I saw myself as a professional doing a job, but that wasn’t always how others saw or treated me and the other models. A lot of this anger and humiliation did end up in my early work. In almost all of my art, past and present, the women are in positions of power, and the men who have wronged them are the ones being subjected to degradation and punishments. But then there are also the early works that depict my depressed and discouraged mental state where all the characters act out in suicide or homicide.

Ann: I’m so glad you acted out in your art and not real life! Art really does save lives! We were lucky to have that amazingly rich “alternative” universe known as the punk-rock/new-wave counterculture scene in downtown New York. And lucky, we survived it!
Kitty: I’m so fortunate to be an artist and writer and have a creative outlet for whatever goes on inside my head. Now, my life is wonderful, and I am in a stable, healthy place mentally, emotionally and physically. I still use my art and writing to express personal or larger issues of living life as a woman and human being. I’m not sure we’ve really come a long way, baby, so I keep putting it out there. Judging by how many young fans I have who relate and identify with my work, I see that world peace and gender equality still has a very, very long ways to go.

Ann: Thank you, Kitty. You continue to inspire. And I assure you, we both have come a long way, baby! 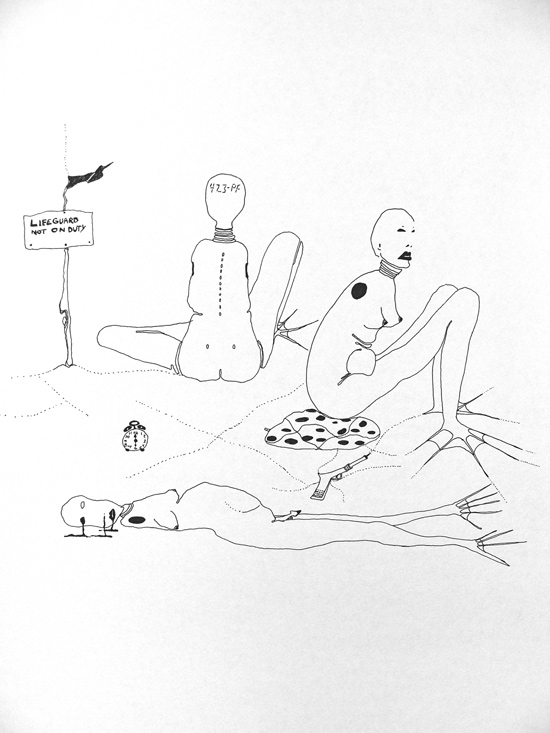