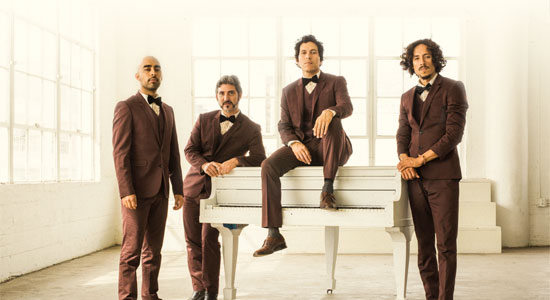 The political is personal and poetic for Chicano Batman

As far as psychedelic alt-Latino bands with major dollops of soul go, Los Angeles’ Chicano Batman is the sleekest—not solely for its sound or for its sophisticated socio-political rhetoric, but also for its bespoke, sartorial dress sense. Nearly 10 years since its start, the raging, dynamic quartet—driven by Bardo Martinez’s lead vocals, poetic texts and organ/guitar mix—focuses more than ever on its ministerial lyrical edge on the new Freedom Is Free (ATO).

“To be honest with you, the band came together on the idea of creating a unique brand of music,” says bassist/singer Eduardo Arenas. “We all went to college. Some of us have master’s degrees, and some of us have had careers before jumping on the Chicano Batman bullet train. Our band name is a social-political one. As persons in the band, we have synonymous ideologies about our vision of this country and our capitalistic/militaristic (dis)position in this world.” Chicano Batman lyrics haven’t always reflected that socio-serious voice, as a lot of its songs over a handful of albums and EPs speak about love, which often is a stronger political tool than anything else.

“But we’re in 2017 now,” says Arenas. “Police killings of unarmed citizens are at an all-time high. An ignorant narcissist who lost the majority vote has become the new president of this country.”

Martinez goes on to mention how “Arrow To The Sun” (“Flecha Al Sol”) is a verbatim rendition of a children’s book with the same title that surrealistically imagines a young boy in search of his father who happens to be the sun. “My lyrical approach was in first person, i.e. becoming the protagonist of the story, and since the book provides simplistic yet extremely rich imagery, writing the lyrics was easy,” says Martinez.

Yet, Arenas sounds proudest of Martinez when he goes for the throat on dismantling the establishment of the right and the left to come up with something that lacerates between the eyes. “Bardo contributed most of the compositions, and you can just hear how his lyricism evolved throughout the years to wind up here,” says Arenas. “The messages are coming through much clearer now. This will be important as we enter into a new era with a new president. Shit, I don’t even want to say his name. There’s only so much we can take. Our new album opens up that conversation as we become more explicit about our ideologies. If not now, then when?”