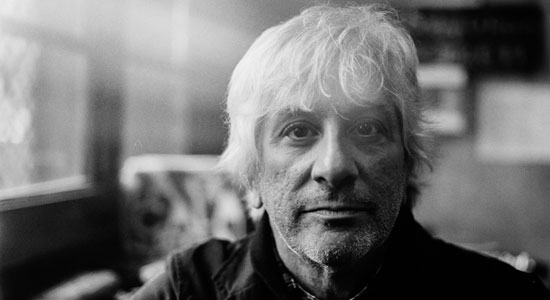 MAGNET sent me than 20 songs and asked me to choose and write about 10. A refreshing change from the “let’s hear about your top 10 albums/songs of all time,” which is rather tedious and changes all the time. A catchy tune on the radio and I’m slayed. I’ve been working so much on my new album, Electric Trim, that I’ve only sporadically been listening to other stuff at the moment. But there’s no doubt that all the music I’ve heard and loved over a lifetime of listening has always had a strong impact on whatever I find myself doing at any given moment. Some tunes/LPs stay around forever, others are here-and-then-gone but no less significant. Here are some off-the-cuff impressions selected from MAGNET’s choices. —Lee Ranaldo, Rio de Janeiro

The Beatles, “The End’
A fitting title for the last song on the last Beatles album ever? I think so. (Let It Be came out last but was recorded before Abbey Road, which was the band’s attempt to go out on the right foot after the unpleasant experience of trying to make a record on a soundstage.) Is this Paul trying to tie a knot on the end of one of the most fabulous rides in the history of entertainment? The social impact of what the Beatles achieved can’t be measured by music alone. By the time they were recording “The End,” they had changed the consciousness of the culture (with help and stage-setting by many like-minded individuals across the globe; I’ll name Dylan and Ginsberg and Kerouac as only a few of the influentials from our side of the pond—see Sgt. Pepper cover for more, including Gandhi, who was airbrushed out by EMI) in profound ways on every level—helping to introduce the hallucinogenic experience, Eastern mysticism and other pertinent topics to the larger straight world. If “cute Beatle” Paul could admit to using LSD, how bad could it be, really? This track contains Ringo’s only recorded drum solo, all the more powerful for its brevity, which leads us into a glorious round-robin section trading guitar leads (I believe it’s Paul, then George, then John, and then around again) for a nice democratic ending. It’s sobering to realize that the Beatles’ public career lasted all of about seven years, from 1963 to 1970, and that these four men who always seemed sophisticated beyond their years weren’t yet 30 years old when they called it quits. Amazing.

David Bowie, “Moonage Daydream”
A song from Ziggy Stardust, an album that’s so important to me now but to which I came a bit late. I wasn’t swept up in glam music at the time of its release, but when I finally came around to David’s early records, most especially this one and Hunky Dory, I was completely transfixed. The production on these records still stands out as groundbreaking and monumental to me—not to Sgt. Pepper extremes, but this music is very carefully considered, with great arrangements and so much detail. I’ve played this album more times than I can remember, know every second of it by heart—a record that changed lives and defined an amazing period, both in his own career and in the lives of all of us who found our way to it.

The Cribs, “Be Safe”
I was unaware of the Cribs’ music until they invited me to sing on “Be Safe” from their Men’s Needs, Women’s Needs, Whatever album. Actually, I was invited to recite—to do spoken word rather than sing—on the song. We spent a day in the studio in New York with Alex Kapranos from Franz Ferdinand producing. I really didn’t know what to expect but immediately became tight friends with the brothers Ryan, Gary and Ross. I wasn’t sure how my poetic ramblings would fit with the music of this power-pop band, but it worked great and we’ve stayed close since then. I love watching them play—somehow they seem to synthesize the best elements of American indie rock with a U.K. power-pop sensibility. They shot a short film of me doing my bit for this song, which they’ve projected on tour since we cut the track. I’m constantly being sent links to videos of their live shows, with my big face hovering over the band for “Be Safe”! These guys rock!

Ornette Coleman, “Free Jazz”
I love Ornette’s music; it’s so wide-ranging. The first album of his that really grabbed me was Dancing In Your Head, in part because it contains some music he and great music writer Robert Palmer recorded in the village of Jajouka in the Rif Mountains of Morocco—the same place that pulled in William Burroughs and Brion Gysin, and Brian Jones of the Stones, who made the first recordings of the Master Musicians Of Jajouka. Much later, I was able to go to the village myself—a real thrill. That combination of Ornette’s horn with the traditional instruments of Morocco (rhaita, guimbri and drums) was kind of mind-blowing, every bit as psychedelic as what was happening at the Fillmore West at the time. Free Jazz opened even more doors—not least because of the conceptual conceit of the recording: two complete quartets, one in each speaker. Fully composed works that still allowed for plenty of free blowing. And what a lineup! Charlie Haden, Eric Dolphy, Freddie Hubbard, Don Cherry and many other greats—Ornette was making connections far and wide, as he’d continue to do throughout his magnificent career, and blowing the roof off the place, as this record documents.

Bob Dylan, “I’m Not There”
This Dylan song had been floating around in the bootleg universe for a while, having been written during the fertile Basement Tapes period. It didn’t even appear on some of the highly sought Complete Basement boots. It seemed a holy grail of sorts for Dylan-obsessed fans, being one of the many amazing songs that for one reason or other he chose to hold back from the public. In 2006, I was tasked with recording music for Todd Haynes’ fantastically experimental Dylan biopic of the same title, which was a great experience and which included surreal moments such as recording classic mid-’60s electric Dylan music with Stephen Malkmus on vocals that later came out of Cate Blanchett’s mouth in the film. When it came time to put the soundtrack album together, Todd asked Sonic Youth if we would record a version of this song, and we jumped at the task. But rather than have to seek out a bootleg recording from which to learn the tune, we were surprised when Dylan’s office casually sent over the master of this long-sought gem. Bob’s version finally made its long-awaited debut on that soundtrack album, alongside our own version.

Joanna Newsom, “Sapokanikan”
I’m fascinated by Joanna Newsom and all of her work. It contains so much mystery and myth to me that I’m not always sure what’s going on, or what the stories are, but I’m always captivated. Sonic Youth shared a couple bills with her early in her career, in Scandinavia, after her first album had come out, and I’ve seen her perform a few times since. She’s always amazing and unexpected. Her references range far and wide—from what I gather, Sapokanikan is a place name, a Manhattan-located Native American place, with lyrics referencing things I’m not always clear on—from ancient Egypt to the Dutch masters. The song’s video—by director Paul Thomas Anderson, in whose film Inherent Vice Joanna appears—shows her tripping through the streets and alleys of Manhattan, maybe in search of lost spirits from another time. I picture her in the woods somewhere, with perhaps fantastical tiny creatures known only to her gathered round her feet. Her music is an acquired taste for some but one well worth the effort. A completely unique voice and talent.

Sleater-Kinney, “Jumpers”
A fantastic song from an album that is happily no longer S-K’s “finale” since their recent reunion. I love the music that Corin, Carrie and Janet make, and spent a lot of time with this album, The Woods, when it came out. Sonic Youth played a lot of shows with support from Sleater-Kinney, and they were always amazing to watch for their musicianship, style and, of course, songs. This one is a prime example of the way they can rock, with vocals shared between Corin and Carrie (probably Janet, too—all great singers). So fierce and smart.

The Stooges, “Down On The Street”
Gotta pick this one, right? All hail the Psychedelic Stooges (their original name)! This killer track opens one of the greatest albums of all time: Fun House. Iggy, Ron and Scott Asheton and Dave Alexander kicking out the jams in an L.A. studio but fully representing the sounds of Detroit Rock City, 1970. This album, its self-titled predecessor and Raw Power (which came third) are in my DNA at this point. These records set the stage for punk, new wave, “minimal rock” and basically, along with the Velvet Underground, defined an entire period of American music. These albums are among the greatest ever made, and I’ll be listening to them forever.

Sharon Van Etten, “Taking Chances”
Sharon’s music is so beautiful and lush, led by her amazing voice. She and I were travelers in the same musical community, but we’d not officially met until sometime in 2016 when I reached out to her about possibly singing on some of the songs on my then-in-progress album, Electric Trim, which is finally seeing release after a long gestation. Little did I know that Sharon was a Sonic Youth fan and immediately agreed. She ended up singing on six songs, and we even did a duet together. Her voice adds so much to my music; I was so pleased that she had the time to do it. I’ve heard a couple small bits of new music she’s been working on and can’t wait to hear more.

Neil Young, Arc
Arc, along with its companion Weld, came out shortly after Sonic Youth toured with Neil for three months back in 1991. We were really amazed that he asked us to tour with him. I’ve loved his music since forever; it means so much to me. We experienced our first taste of a big-time rock tour, with buses and hockey arenas and a “pro” crew that was not always too welcoming (at least at first) to noisemakers such as ourselves. But Neil got it—he dug what we were doing and gave us encouragement even as the hippies in the crowd tried to boo us offstage in their impatience to hear him. We were especially digging the far-out, end-of-song noise jams that Neil was getting into with Crazy Horse on that tour. The story goes that Thurston suggested to Neil that he make an album of only noise, culled from those jams, with no songs to get in the way. Some months later Weld and Arc hit the shelves—one full of songs (Weld), the other (Arc) containing edited excerpts from his many noise jams on that tour. Needless to say, we were all over it. Another experiment in his long and rangy career. Neil is one of our true treasures.