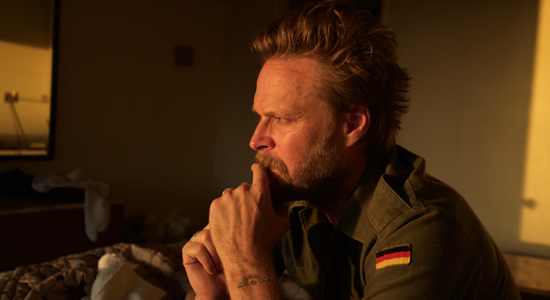 M.C. Taylor, otherwise known as Hiss Golden Messenger, insists that his relationship to faith has been a consistent theme on his records. “It’s music about faith, but it’s not devotional music,” says Taylor. “Frankly, I’m surprised that sort of thing doesn’t exist more, because I think a lot about it, and I’m certainly not a genius by any stretch of the imagination.”

He’s also not a church-going Christian. “I think modern Christianity is used far more as a weapon than as an embrace,” says Taylor. “But at the same time, we have to be able to be talk about things that are deeper than what appears on a page.”

Along those lines, the new Hallelujah Anyhow (Merge) might be best described as pastoral, its folksy spirituality, roots-rock familiarity and live-to-tape feel as weathered and comfortable as a threadbare love seat on a screened-in porch. It’s also the most cohesive entry in HGM’s seven-album catalog—and that’s mostly by way of execution.

“With this album, you’re definitely hearing the sound of five very particular personalities in a room together playing, with the mics wide open,” says Taylor. “Most of the album was recorded live, so I was leaning pretty heavily on each member. The way we made the record was pretty old-school.”

With his family firmly rooted in Durham, N.C., for 10 years now, Taylor has fully embraced his Southernness. “My two kids were born here, and I’ve always been a student of the culture,” he says. “I felt like if I wanted to understand it in a deeper way, I needed to live here.”

A native of Irvine, Calif., Taylor was nudged in a musical direction by his father, a former member of the Settlers, an outfit affiliated with John Denver. He first collaborated with longtime partner Scott Hirsch in a hardcore punk band, then shifted to a more classic folk/rock sound as he began writing his own songs. In his late teens, Taylor headed north to San Francisco, where he fronted critically acclaimed country-ish indie quartet the Court & Spark, which reached its idiosyncratic zenith with 2004’s Witch Season. “We weren’t all that successful—but we tried,” says Taylor.

Not long after the Court & Spark’s final release, 2006’s Hearts, Taylor relocated to Durham to pursue a master’s in folklore at UNC. He parlayed that degree into a several-year gig as a folklorist for the state of North Carolina. “My wife and I needed change,” Taylor says of his move to the South. “We were in San Francisco, and we were making a lot of lateral moves, but there didn’t seem to be any way for us to accomplish the things we wanted to—like having kids and buying a house—without making pretty drastic, cosmic changes to our lives. When I moved here, I didn’t know what I was going to find. I don’t even think I knew what I was looking for.”

Once settled in Durham, Taylor began to record with Hirsch as Hiss Golden Messenger while performing solo acoustic shows. A proper debut, Bad Debt, came along in 2010. After two subsequent albums saw limited release, Merge signed the band, releasing 2014’s The Lateness Of Dancers and Hallelujah Anyhow’s predecessor, 2016’s Heart Like A Levee, the latter recorded by Taylor and new Carolina cohort Bradley Cook with a close-knit group of collaborators that included Cook’s brother, Phil, and vocalists Tift Merritt and Alexandra Sauser-Monnig.

The collective has tightened even more on Hallelujah Anyhow, the band dynamic of the HGM experience sounding more unified than ever. Much of that is a byproduct of hopping off the road and right into the recording studio. “The last record came out in October of 2016, and this one is out less than a year later,” says Taylor. “I had the songs and the head of steam to do it. I was trying to avoid that period of sitting around and waiting—I don’t like it, and I don’t think it’s very productive. The longer you stand in that in-between space, the more you hope and think that the room you step into is going to be the greatest room you ever entered. And that’s never the case.”