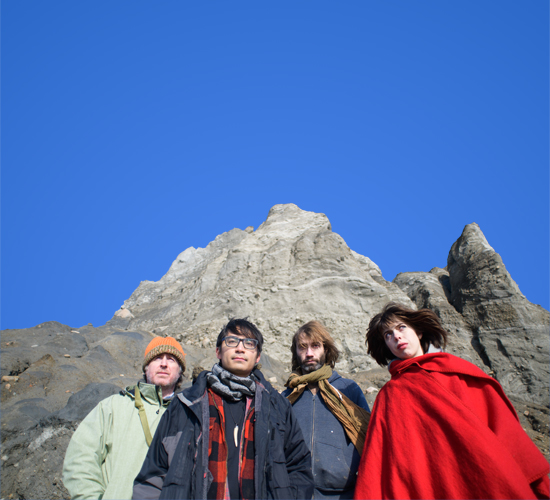 The story of the salt doll, like most parables, tells itself simply and well. After years on dry land, the salt doll arrives at a shoreline. “What are you?” asks the salt doll. “I am the sea,” the water replies. When the doll presses the matter—“Yes, but what are you?”—the sea invites the doll to place first a toe, then a foot, then a leg into the water. With each deeper measure, the doll understands a little something further but must give a part of itself to the sea in order to gain the knowledge. In the end, the doll, having gradually given its entire earthly body over to the sea in order to deepen its understanding, comes to know the sea in full because (“The sea is I!”) the sacrifice is at last equal to the wisdom it desired.

Having released its fourth full-length record, Eyeland, in June 2016, Providence R.I.’s the Low Anthem had barely begun the first leg of the support tour when a serious car accident in Washington, D.C., crushed most of its instruments beyond repair, totaled the van and laid its members up in the hospital for various stays of recovery.

“Everybody was bedridden for two or three weeks,” says frontman Ben Knox Miller. “I got it the least serious of anybody, but Jeff (Prystowsky), my writing partner, got it the worst.”

It took the band four months to get its Eyeland tour even halfway salvaged. In the meantime, Knox allowed himself a little time to focus on small projects at his house. One of these projects began when he awoke in a darkened bedroom to hear that he’d left a turntable rotating while the needle jumped and clicked in the record’s inner groove.

“I don’t know why I’d never thought to use that as a metronome,” says Knox, who quickly began Rube Goldberg-ing a series of effects and apparatuses, from scratching nicks and divots in the stylus to change up the beat, to running the whole audio signal through a length of PVC pipe. Over this set of organic, half-randomized beats, Knox wrote and played spare musical and melodic threads.

“The process was literally destructive—as in, destructive to the stylus,” he says. “When I played the demo stuff that I’d come up with for Jeff, we did try some re-recording. But we quickly realized that re-recording couldn’t replicate the most interesting sounds on the demos. You couldn’t just ‘re-do’ it, because the sound of the thing had changed incrementally in real time as the record turned. So this new record largely grew from cleaning up and adding onto what was already there.”

The Salt Doll Went To Measure The Depth Of The Sea (Joyful Noise)—Knox ran across the parable in Kay Larson’s John Cage bio Where The Heart Beats, which, he says, “lit me up”—is a sparse, minimalist record when considered alongside the more expansive Eyeland. But the hushed, intimate collection of songs honors the contemplative mood that sparked its composition.

The music honors its moment of birth, the dearly-paid-for time that allowed it to germinate. “Some of the obstacles (to re-recording it) were technical,” he says. “There was no way to impose any time changes on what was recorded, so the core of the music’s ‘time’ had to remain, or we’d have had to throw the whole thing out. And there was a kind of ‘sound assassination’ even with the smallest parts. The tiny micro-voltage of that needle jumping and skipping around in the groove had to be brought up into an order of magnitude where humans expect to hear music. The components were tiny and simple and organic, and they just sounded in the end so different from a digitally generated loop.”

And, like the salt doll, ultimately dispersed throughout the whole—everywhere present, nowhere locatable. Is there a better way to think about creation?