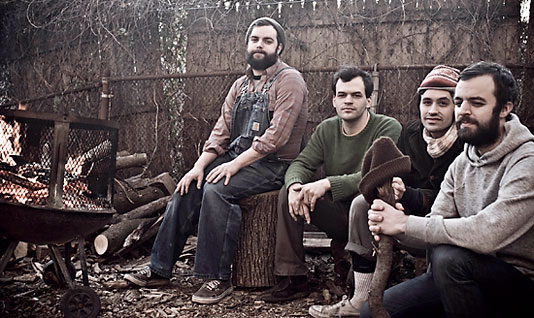 Philadelphia’s mewithoutYou has taken a long, strange trip—musically and spiritually—to arrive at fourth album It’s All Crazy! It’s All False! It’s All A Dream! It’s Alright (Tooth & Nail), due May 19. Beginning as an experimental screamo/prog-metal act in 2000, the group, led by brothers Aaron (vocals) and Mike Weiss (guitar), is now experimenting around the borders of indie rock. Aaron still employs lyrics with biblical references and storytelling vocals, but from the opening keys of “Every Thought A Thought Of You” to the triumphant Neutral Milk horns of “Allah Allah Allah” and the Man Man-ish “Fig With A Belly Ache,” It’s All Crazy is clearly the band’s most colorful record to date. Assisted by producers Brian McTear and Daniel Smith (of the Danielson Famile), the members of mewithoutYou often worked separately in the studio. “The fact that they were not all there all the time brought its own intensity,” says McTear, who notes that a good amount of material was written on the spot while recording. “The reason Aaron seems so ‘present’ in his songs is that he is largely generating the finishing touches extemporaneously.” MAGNET spoke to Mike Weiss about the upcoming album, Sufism, substitute teaching and baseball.

“every thought a Thought of You”:
https://magnetmagazine.com/audio/everythoughtaThoughtofYou.mp3

MAGNET: You’ve evolved a lot musically since your first record. Did you guys have a direction in which you wanted to push this record?
Mike Weiss: We made a conscious decision to do something totally new for us. Not new, like change the world or do anything that nobody has done before, but new for us. We wrote anything we wanted to without any rules. Nobody could shoot anything down. We lost any kind of boundaries or reference points that we worked from. The result was a lot of crazy things that didn’t work out in its own great way. We honed in on nice-sounding four-chord progressions and lyrically tried to promote a feeling of “There’s something that exists in this band, although we’ve had so many disagreements and we’ve almost broken up so many times.” But for the most part, lyrically the challenge was, “What can we all touch on?”

So Aaron wanted to represent all of you guys in some way through the lyrics and not just himself?
Yeah, in a sweet way where we could all be up onstage playing these songs that are about all of us and not just about Aaron. A lot of the earlier songs were basically Aaron’s experiences, which we didn’t really have a problem with.

The album title It’s All Crazy! It’s All False! It’s All A Dream! It’s Alright is a reference to Sufism. Is there a strong spiritual and religious sense throughout the record, as there was on (2006’s) Brother, Sister?
There are references to Sufism on the record that come from the poet Rumi and also some biblical references. [The title is from] a Sufi sheik that my brother and I learned growing up through our parents. The author of the sheik is called M. R. Bawa Muhaiyaddeen. The Golden Words Of A Sufi Sheikh. He came to Philly from the Sri Lanka in the ’70s to preach. He would speak and people would come listen to him. I remember him saying about the world: “It’s all crazy! It’s all false! It’s all a dream!” But it’s not religion as much as it’s just based on doctrine and tradition. If that’s what you mean by religion, then definitely.

Do all of the band members share the same religious beliefs as your brother Aaron?
I think we all have a certain faith in a God that exists. There are moments of doubt in everyone’s faith. Sometimes that doubt is stronger than others. Seriously, I think that everyone believes in God; they just don’t know how to express it. That’s my opinion on faith. I believe that it’s the voice inside you that is your conscious. We all have that voice that says we shouldn’t be doing things, but we do them anyway. But it’s the beauty of our lives. It’s something that unites us. I feel like Aaron tries to harness that, and there’s nothing more glorious to us then when we’re on the same page, onstage playing our music. That’s our little goal.

Jeremy Enigk was featured on the last record. Are there any notable guest vocals on this record?
Not really. But we did get a lot of help from friends. But nobody as big or well-known as Jeremy Enigk. We had Daniel Smith, who plays in a band called Danielson. He has a real distinct voice, and he sang backup on a lot of things.

I could’ve sworn I heard some female backup vocals on a few songs.
There were female vocals done. Her name is Eliza Jones. She’s a local musician who does a lot of studio work. You’ve probably heard her on several Dr. Dog records. She’s in a band called Buried Beds. She’s just a friend of the band. That’s what we enjoyed on making this record. We got to work with some local artists who we really respect.

How was working with Brian McTear and Daniel Smith?
It was perfect. Brian had such a great sense for staying focused and figuring out things like playing the riff at a different part of the neck to get a more fluid sound. It would just work out so much better. With these new songs, you think that you could just go in the studio and mimic what you do live, but it doesn’t always turn out right. He was just really good at that. Daniel is a songwriter as well, and he was able to work with Aaron one-on-one with his lyrics and gave him confidence, because that’s always been a big problem with Aaron. It’s always been a big deal to Aaron to write a song; it’s not all that easy for him. But Aaron really trusted Daniel, and he really helped him overcome some of that anxiety.

What’s with all the “part two”s on your albums? You did “Nice And Blue (Pt. Two)” on your last record, and on this one you do “Bullet To Binary (Pt. Two).”
That’s totally Aaron. The instrumental side of the music for every song for all the part twos we’ve done before were never meant to be the second part to anything. It comes from Aaron when he puts lyrics to it. Sometimes when he’s working on the vocal approach, he’ll take old lyrics and practice with those. Sometimes it works. Sometimes it just come out of laziness—not laziness, but he just doesn’t have lyrics at that point in time. It’s funny cause the opening line is “Let us die/Let us die”; he uses as a pun in the second version when he talks about being in the garden when he says, “Lettuce grow/Lettuce grow.”

I understand that you’re a substitute teacher, and some of you go to college as well?
Yeah, I am. Aaron, (bassist) Greg (Jehanian) and (drummer) Rickie (Mazzotta) are all taking classes this semester.

Brian McTear told me that you play in a baseball league. Is it an organized league?
Actually, it’s like a sandlot kind of situation. It does take a lot of organization to play the game. We try to play the game the way it’s meant to be played. We organize a weekly game that everyone looks forward to.

Are you the only one in the band who plays?
No. Rickie played quite a few times, and he turned a couple sick double plays at second base; he’s a good hitter. Aaron played once, and the other time he was an umpire.