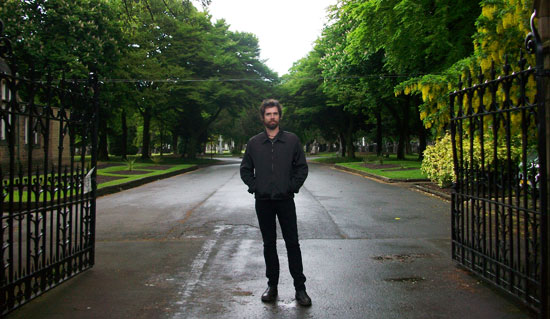 As a kid, I’d often fantasize about what it would be like to travel the world in a rock band. I’d imagine how much fun it would be playing every night in a different city, seeing new things and meeting interesting people. As it turned out, I got to do just that. First with Superchunk, then with folks like Robert Pollard, Whiskeytown and Marah. Things started to get crazy a couple years ago, and I’ve been on a seemingly continuous round of recording and touring with the Mountain Goats, Bob Mould, Superchunk and the focus of this tour diary: A.C. Newman (the solo project of New Pornographers singer/songwriter Carl Newman). This non-stop rock ‘n’ roll juggernaut is actually pretty close to what my 12-year-old self imagined. But I had no idea there’d be so many Premier Inns involved. Or so much warm beer. Or vomit.

May 18
This is the final leg of A.C. Newman’s Get Guilty tour. We finished the North American portion back in early March with an appearance on The Late Show With David Letterman, a wonderful way to wrap up things. Now it’s time to bite the bullet and hit the U.K. for a handful of shows. I say this because it’s been my experience that in order for your record to be given a proper shot and for your overseas label to take you seriously, you must turn up on their shores to play shows. Unfortunately, much of the time those gigs are, well, not so happening. You’ll have a great one in London, but most of the other shows are losing propositions. Carl has no illusions about this trip. He says he’s not expecting much in the way of turnouts. We’ll see how it goes. At the very least, it’ll be good to play together again.

When I arrive at JFK’s Delta international terminal, I’m a little put off. I know times are tough and airlines have to scale back on expenses, but outfitting your agents in red Delta T-shirts instead of actual uniforms does not inspire confidence. What it says is, “You think this is bad, wait ’til you get on the plane.” In the middle of the flight to Manchester, Carl and I are standing in line for the lavatory. He whispers, “This is the worst international flight I’ve ever been on.” I have to agree. It’s a combination of things: The seats are so close to each other, it’s ridiculous. Carl and I are more than six feet tall, and our knees are touching the seats in front of us. What in the name of Samhain does a Kobe Bryant or a Sir William Corgan do in these situations? Yes, I know they’d be in first class, but things don’t look all that much better up there. Then there’s the English gentleman between us. He stares straight forward the entire flight, his only movement the raising of a wine-filled cup to his lips. I hardly know he’s there. Except for when he lets loose the rankest fart ever to reach my airspace. It’s positively criminal. Yet I have to give him points for the the stoic poker face he retains in the 45 seconds following his assault.

After we land in Manchester, we’re met by our tour manager/label head, Alun, and our bassist, Miranda Brown. Miranda got in a few hours earlier from Austin, Texas, and she’s on fumes from lack of sleep. Outside of being brutally murdered, there’s nothing worse than arriving at your hotel after a long journey and being told your rooms will not be ready for several hours. It hurts you to your soul. We’re given this news, and our souls hurt. So we kill time at a local cafe. Alun has a tiny car, and it’s decided that after eating, he and Carl will go to his flat to pick up some stuff, and Miranda and I will walk the mile back to the Premier Inn. She and I take no more than 10 steps before the clouds open up on us for the duration of our walk back. I picture my umbrella nestled snuggly in my suitcase, and I curse God for inventing rain, Manchester and Alun’s small car.

Manchester has a remarkable musical history. Oasis, the Buzzcocks and the Fall all hail from here, as did the Smiths. Alun informs us that the cemetery across from the Premier Inn was the inspiration for their tune “Cemetery Gates.” While Miranda and Carl sack out at the hotel, guitarist Shane Nelken and I hoof it up to the cemetery to get in touch with our inner Moz. We take a walk around the grounds, and it’s actually quite beautiful, excepting the fact that there are submerged dead bodies everywhere. Shane used to work in a funeral home, and it’s interesting hearing about the inner workings of that world. Although I’m a little disappointed to hear that the number of times he’s made love in a graveyard barely cracks double digits.

After a fabulous Indian dinner, I’m starting to fade. I elect to cab it back to the hotel while the others go out on the town. The U.K. is abuzz at the moment with news that the speaker of the House of Commons wrote off hundreds of thousands of pounds worth of expenses he was not entitled to. Seems he will be the first speaker in more than 300 years to be forced out of office. I think the last guy was tossed for wearing the wrong kind of breeches in front of Mary II. Definitely something breech-related. The Indian cabbie and I never speak until he hands me my receipt. “Here you go,” he says cheerfully. “If they can write off their houses, surely you can write off this.” Damn straight, my man.

[…] to do a diary of his recent European tour with A. C. Newman. The first entry is available on their website. This is filed under Scharpling & Wurster, Superchunk. […]