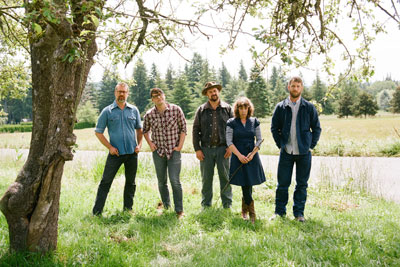 R.E.M.’s Peter Buck adds some very Peter Buck-esque guitar to The King Is Dead (Capitol), the latest album from the Decemberists. So it’s not surprising that when Colin Meloy and Co. visited KCRW show Morning Becomes Eclectic to promote the album with a short set last month, they reached into their bag of songs and pulled out an R.E.M. cover. As you undoubtedly know, “Cuyahoga” originally appeared on 1986’s Life’s Rich Pageant and references the Ohio river famous for repeatedly catching on fire. You can watch/listen to the whole Morning Becomes Eclectic performance here and download an mp3 of “Cuyahoga” below. The Decemberists start a European tour tomorrow and will hit the road in the U.S. next month. Read Q&As with Meloy from 2009 and 2008, as well as our Decemberists Over/Under.