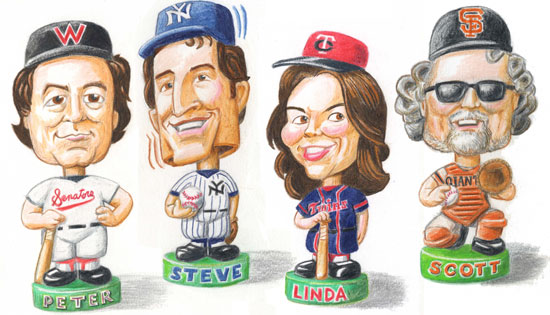 Having read Ball Four, pitcher Jim Bouton’s seminal diary of his 1969 season with the Seattle Pilots and, later, the Houston Astros, probably seven or eight times—first in high school, then each spring for a few years in my 20s—I recall this jacket blurb about it from author David Halberstam as vividly as many of Bouton’s stories: “A book deep in the American vein, so deep in fact it is by no means a sports book.” Comparing the Baseball Project, whose Volume 2: High And Inside (Yep Roc) came out this week (following up 2008’s Volume 1: Frozen Ropes And Dying Quails), to Bouton’s revolutionary and, ultimately, humanizing look inside major-league clubhouses could be considered more than a seventh-inning stretch. Where the comparison rings true, however, is how deftly the band (guitarists/vocalists Scott McCaughey and Steve Wynn, drummer Linda Pitmon and bassist Peter Buck, the latter on loan from obscure indie rockers R.E.M.) mines the national pastime for its inherent pathos and abundant humor. This stuff is pure Americana any music fan with a heart, whether they care about the game or not, should appreciate.

Detailing each of High And Inside’s pleasures would take longer than an extra-inning American League contest, but highlights include Wynn’s opening “1976,” an ode to the late Detroit Tigers pitcher Mark “The Bird” Fidrych that’s also a paean to lost youth; “Don’t Call Them Twinkies,” a collaboration (featuring a monster riff) with Minnesota Twins fan Craig Finn of the Hold Steady; and spare closer “Here Lies Carl Mays,” which finds McCaughey chillingly embodying, from the grave, the mournful voice of the New York Yankees hurler, whose wayward pitch caused Cleveland’s Ray Chapman’s untimely demise in 1920: “I wish that killer pitch never left my hand.”

The LP’s centerpiece is McCaughey’s masterful “Buckner’s Bolero,” which, over nearly six slow-building, sans-chorus minutes, spells out the confluence of events and what-ifs leading to Bill Buckner’s infamy, courtesy of his misplay for the Boston Red Sox in game six of the 1986 World Series. McCaughey correctly posits the notion that the outcome wasn’t Buckner’s doing alone: “Bob Stanley picked a pretty bad time to uncork a wild pitch/And I’m sure he’s still thinking you could’ve blocked it, Rich/Then the tying run might’ve not been tallied by Mitch/If one play killed the Sox, can you please tell me which?” Amid guitar squalls, McCaughey concludes by wondering if Buckner’s error wasn’t actually a weird blessing: “Some kind of fame lies in being a scapegoat/And if not that, then you’re just an historical footnote/And your 22 years playing ball might be forgotten/Maybe Bill Buckner was lucky his luck was so rotten.”

Diamond geeks will dig these tunes on a different level—mostly because they’ll get the references—but all it takes to enjoy the Baseball Project is an interest in smart, funny and lyrically poignant rock ’n’ roll. To celebrate High And Inside’s release and baseball’s welcome return, we asked McCaughey and Wynn to pick a few of their favorite baseball songs. So they did. (Read our 2009 Q&As with McCaughey and Wynn.)

Jonathan Richman “Walter Johnson”
McCaughey: I find the conviction with which Jonathan delivers this loving tribute to the great Washington Senators strikeout king so incredibly moving. It’s also a bit funny, in that dingy Jonathan way that he extemporizes on a well-thought-out song, jamming lines into his own special rhythm. I love the way he randomly accompanies himself on guitar; it’s almost a dialog between voice and guitar, really. (Though he recorded a lovely, completely a capella version, below, in more recent years.) This song captures the nostalgia evoked by the old-time players—it’s a way of looking at a player that’s just not possible in this age of too much information. Makes me wish that Walter Johnson was my friend, though I wouldn’t have cared to wave at his fastball. Audio

Bob Dylan “Catfish”
Wynn: I just love that Bob Dylan wrote this song. To my ears it’s not a metaphor or a commentary—he just seems pretty intrigued that Catfish Hunter went and made all that money, and that was enough reason to write a song. Maybe he was just happy that Catfish wasn’t gonna work on Mr. Finley’s farm no more. Audio

The Treniers “Say Hey (Willie Mays Song)”
McCaughey: I will give three simple reasons why this is a favorite. First of all, and most importantly, the Treniers rock, a fact which they corroborated with their undeniable call to arms, “Rockin’ Is Our Business.” Secondly, they recorded this 1955 hit about my all-time favorite player, Willie Mays. Third, they got Willie Mays on the session—talk about knockin’ one out of the park! Now if the Baseball Project can just get Tim Lincecum and Ichiro to join in on Volume 3…Video

Warren Zevon “Bill Lee”
Wynn: I guess Zevon and Bill Lee were buddies, and that makes sense given that each were among the most fascinating people in their respective fields. And both sabotaged promising careers with self-destructive behavior and outspoken opinions fueled by a careening intellect and possible lack of self-control. “You’re supposed to sit on your ass and nod at stupid things/Man, that’s hard to do/And if you don’t, they’ll screw you/And if you do, they’ll screw you, too”—among the best opening lines ever. Video

Billy Bragg & Wilco “Joe DiMaggio Done It Again”
McCaughey: Not to slight “Joltin’ Joe DiMaggio” (or even “Mrs. Robinson,” a great song but not really about baseball, is it?), this very visual but down-home Woody Guthrie lyric set to music by Billy Bragg and sung by Jeff Tweedy really captures the era when TV first made its presence felt. Its exuberance belies the somewhat somber nature of the man himself, but it exalts in the miracles that he seemed to be capable of at any moment on the field. Video

Barbara Manning And The SF Seals “Dock Ellis”
Wynn: Good luck tracking this one down. I searched far and wide for my own copy of the CD single, and I’m not letting it go. The lyrics are pretty straightforward, but it’s the music that somehow feels like you’re actually inside Dock’s head while he was tripping as he pitched a no-hitter. Dock Ellis! The great lost psychedelic indie rocker. Who knew? Video

Steve Goodman “A Dying Cubs Fan’s Last Request”
McCaughey: This is typically on every list of classic baseball tunes, and for good reason. No doubt made even more poignant by Goodman’s death from cancer, even non-Cubs fans can relate to the yearly tortures of a hapless or luckless franchise. Well, it’s probably easier for a Pirates fan than a Yankees fan these days, but the sentiment and the humor with which Goodman spikes his talking blues cocktail is pretty contagious. Love the twisted little smile on his face throughout his great performance of this overlooking Wrigley. Video

Belle And Sebastian “Piazza, New York Catcher”
Wynn: Not necessarily about baseball, but it does capture the leisure, distraction, romance and idle chatter of a day at the ballpark. I hear that Stuart Murdoch became a baseball fan while making a record in Los Angeles and ended up spending some time at Dodger Stadium. That place would make a baseball fan out of anyone. Video