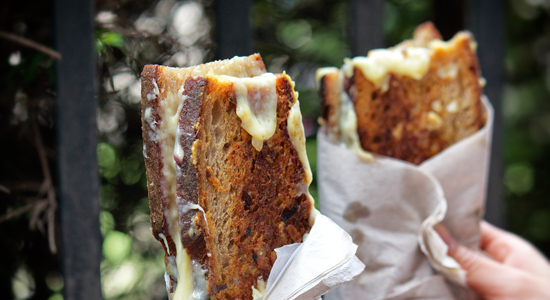 Andrew Elstner: The greatest grilled-cheese sandwich on the face of the earth is at the Borough Market in London. I’m not the first to write about it, nor is this my first time writing about it. Inside the market, you’ll find the Kappacasein stall where this legendary sandwich is served. My friends Claire and Paul, who run U.K. band p.r. company A Badge Of Friendship, introduced me to it. We showed up starving, walking past piles of meat pies and pastries, thinking big, “I’m seriously going to eat one of those meat pies, too.” The line was big at the Kappacasein stall as folks lined up for their two big bruisers: the toasted cheese and the raclette. The raclette is simple, but insane. You need a raclette machine to properly do it. It’s basically a unit that holds a giant half wheel of cheese that has a moveable flame bar that sits over the top of the flat side of the wheel, melting and caramelizing the shit out of the first half inch or so of cheese. That cheese and the crispy edge bits are scraped off onto a plate of cooked new potatoes, with gherkins and pickled onions on the side. Holy shit. It looked and smelled amazing. Nearby though, the uncooked toasted cheese sandwiches sat waiting to be ordered. Sourdough bread, three kinds of cheese piled foolishly high, spiked with minced onion and leeks. You order your sandwich, they mash it onto a panini maker and out comes the greatest grilled cheese on earth and maybe one of the top-five sandwiches of all time. I’m not exaggerating. Melty, salty, tangy, oily, onion-y and a good crunch from the bread without it being a total mouth slicer, laced with a crunchy caramelized cheese crust all around the edges. Super filling, but you still cry when it’s gone.