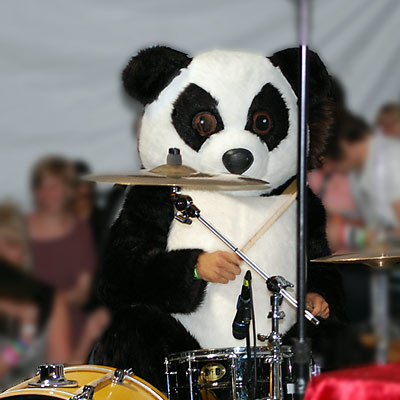 MAGNET’s Corey duBrowa checks in from Austin’s SXSW and finds that the world around him has suddenly faded to black and white:

With the benefit of the hindsight that comes from the morning after the night before, I’m not quite certain where all this panda nonsense came from, to be honest.

I mean, sure, it was late and all. And it had been a long, hot day of musical deli-tray adventure, ranging from acts like San Diego’s Wavves (basically Nathan Williams playing distorted E chords up and down the neck of his Fender Mustang and feeding the whole speeded-up mess—guitars/vocals/feedback/whatever—through a giant Marshall stack tucked in the back corner of Emo’s main room) to Brooklyn crowd faves the Hold Steady (led by an ebullient Craig Finn, the boys played a sun-baked set of their E Street ‘Mats best to a full house of singalong fraternity faithful) to New York Vampire Weekend-on-spring-break-from-private-high-schoolers Harlem Shakes to an entire evening of singer/songwriter magic at Momo’s, simulcast for the benefit of the NPR community (the country flavor: Jon Langford And The Pine Valley Cosmonauts; the jingle-jangle version: North Carolina’s Rosebuds; and the “classic” iteration, via Gary Louris & Mark Olson’s amazing set of Jayhawks material, including personal favorites such as “Two Angels” and immortal ballad “Blue”). Situation: good, and mostly normal.

Somewhere along the way, a conversation started concerning the merits of pandas. I don’t really know why, precisely; it could have been the lackluster set from Edmonton’s Hot Panda (note: a new singer might help), or it could have been the “mmm,Empanadas” food trailer we passed somewhere on Sixth Street (which we misread as “mmm,Pandas”). In any event, somewhere toward the end of the Rosebuds set, an idea began to take shape, at first individually, and then collectively: We should invent a fake band that leverages the Panda theme we see proliferating across Austin and use our social media wherewithal (code for “put stuff on Twitter”) to begin to hype them. We could call the band “Pete Panda And The Dancey-pants” or, more to the point, “Panda-monium.” Make them fluent in dance punk. Give them a cool logo and MySpace page. You know, do it up right, like we do.

So somehow we found ourselves, at around 1 a.m., trooping into the faded, down-at-the-heels Beauty Bar, where another group of electro/punk Edmontonians, Shout Out Out Out Out, were scheduled to close out the evening. But the bill was running a bit behind schedule, and on stage right at that moment was a dude from Oakland who billed himself as Wallpaper; he was flossing a Michael Jackson-issue sequined jacket and glove combo, white porkpie hat, and he stood between two giant amp stacks with a mic in his hand busting out freestyle rhymes and singing with robot-like precision through the assistance of autotune, making a run at Bell Biv Devoe’s “Poison” to the delight of the shimmying crowd. And he kept referring to some “panda,” which immediately made us all suspicious—what the hell was he talking about? Well, as it happens, he was giving the drummer some: Behind him, hidden by the amps, was a guy in a giant panda suit, busting out some seriously James Brown-like funky drumming.

Needless to say, our crew all stood there with our mouths agape: Why make up a fake act like Panda-monium when the real deal was sitting not even five feet in front of us, getting down in front of god and everyone? Was this a sign from a higher power? A note from an all-knowing, all-seeing omnipotent force suggesting that all we needed to do was jot down our every whimsical wish on our respective Twitter pages and somehow they would all come true, like engaging in a deal with a digital genie? (Wallpaper tweets here, BTW).

So anyway, where was I again? Oh, right: the panda. So that pretty much put the kibosh on our fake band, our faux-A&R plan, right then and there.

We wasted $35 on a round-trip cab fare in an attempt to see one of Austin’s infamous late-night “off property” parties, which was supposed to feature the Black Keys’ Dan Auerbach. It ended up being some bogus Red Bull “Moon Tower Party” instead (note to party organizers: let’s not get carried away with Dazed And Confused thematics, OK?), hosted by Detroit’s Von Bondies, who may very well qualify as the lamest band I’ve seen in Austin in about three years. After a quick bite at Katz’s Deli and a ride back to the hotel from our new lady cab-driver friend Stella, we called it a night, wondering just where that panda-suit-wearing dude would show up next. Here’s hoping on a major label. Those bears aren’t just for indie kids anymore; they’re Prime Time Pandas now.

One need only look to the genius of Mr. P, lead singer for the band Desperation Squad, for the original panda head motif. His onstage antics of smearing himself with Hershey’s Chocolate Syrup and rolling around onstage, throwing tortillas out into the audience during the song “Taco Truck” (which has gotten the band kicked out of more than one club and asked never to return,) and verbally abusing hecklers has garnered them a reputation as one tough act to follow. Not many bands want to go on after them, considering the GWAR-like mess